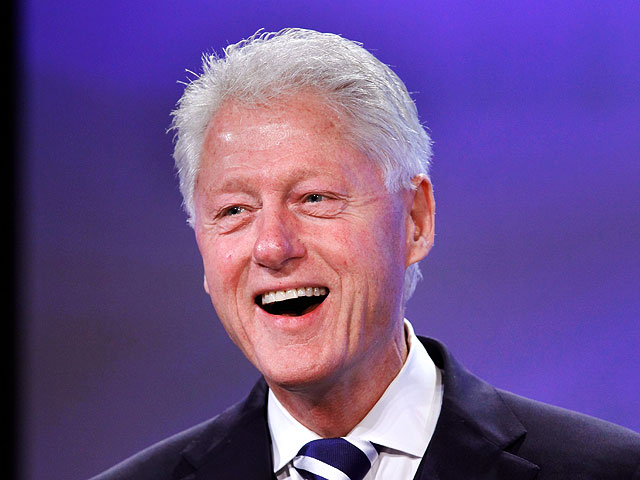 ALBANY, N.Y. - It was just the sort of photo op President Barack Obama didn't need: a former Democratic president who ushered in prosperity and surpluses and a current Democratic governor announcing job growth.

But there it was Tuesday in the warm embrace at center stage, the clubby chit-chat away from microphones as former President Bill Clinton and his protégé, New York Gov. Andrew Cuomo, made clear in Albany everything that isn't being done in Washington.

"It's not helpful for President Obama to have an ex-president and a Democratic governor talking about creating jobs when he can't," said Hank Sheinkopf, a top political strategist who worked for Clinton.

The event was the kickoff of the New York Open for Business conference. It should have been just the latest effort by a governor to make political theater of a campaign goal to revive the economy upstate, an ideal that has escaped every governor since the Catskills drew the nation's top comics and Niagara Falls drew the nation's honeymooners from the 1920s through 1960s.

"If you listen closely to the slogan we use here, you may hear echoes of the slogan you used," Cuomo told Clinton. "We say, 'In New York, it's the economy, stupid.'"

"We are following the state version of that playbook," Cuomo said, stealing the battering ram Clinton used in 1992 over President George H.W. Bush to return a Democrat to the White House for the first time in 12 years.

Almost 20 years ago to the day, it was Clinton in the role of aggressive Democratic governor popular even with Republicans with his then-novel mix of liberal social policy and fiscal conservatism.

Today it's Cuomo, who spent eight years in what staffers proudly called the political "laboratory" of the Clinton White House, the last four as housing secretary.

Together, they show how economic prosperity and surpluses under Democrats happened once, and how Cuomo, with a plan and an early track record to raise hope, may do it again.

Cuomo says he has no interest in the 2012 race and supports Obama. But as his father, former Gov. Mario Cuomo, proved, it's great politics to be in the mix. And Andrew Cuomo, who bowed out of his failing bid for governor in 2002 before it did permanent damage, knows the value of waiting and making potential rivals like Republican New Jersey Gov. Chris Christie sweat.

Meanwhile, Tuesday's event in Albany underscores a chilling message for Democrats worried about the 2012 elections with Obama at the top of the ticket.

"It's subliminal," said Republican Rep. Peter King of New York. Cuomo "doesn't have to be negative about President Obama. ... Right now, with President Obama being unpopular, Bill Clinton looks better than ever. To the extent Andrew Cuomo can identify with him, it's good for the two of them."

Even Cuomo found himself a bit wobbly on that tightrope two weeks ago. He was asked in a news conference if he endorsed Obama's jobs plan with its tax increase. Cuomo declined to answer, saying more than a week after it was proposed that hadn't seen details. Hours later he issued a press release strongly endorsing it.

Cuomo refers to his Clinton years often and reverently and decorates his inner office mostly with Clinton memorabilia, including cigar humidors that were gifts from the president.

Tuesday was "a two-fer," Sheinkopf said. "Bill Clinton gets to look great and Andrew Cuomo gets to look even better."

"The fact that they are talking about creating real jobs makes Gov. Cuomo look even better, especially upstate," he added.

For Cuomo, the political imagery also makes clear that of his mentors, the one most relevant today is not the elder Cuomo long attacked as a big-spending liberal, but Clinton, who calls himself a "bleeding-heart cheapskate."

"It seems to be a pragmatic, perhaps less philosophical approach than his father," said professor Doug Muzzio of Baruch College's School of Public Affairs. "I don't think he would ever call himself liberal as his father still would."

A Quinnipiac University poll last week found Cuomo had a 66 percent approval rating, including 6 in 10 among Republicans and independents, and half of those polled said Obama should be more like Cuomo.

Tuesday's event also helped give Cuomo a prominent spot on the Democrats' small bench for future presidential bids. Already, polls and some pundits are talking about the New Yorker running for the office that his father famously chose to eschew.

For Clinton, it was a rare trip to Albany, but not his first.

In 1994, he flew to Albany to get the blessing and support of the New York governor and Democratic icon of the day: Mario Cuomo.

Man shot and killed by police at protest in Louisville