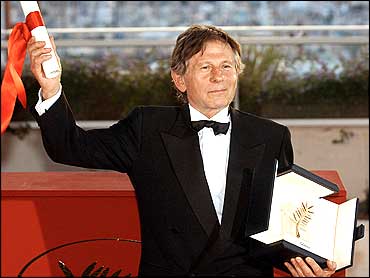 Roman Polanski, who's been a fugitive for the past quarter century after pleading guilty to having sex with an underage girl, won the best-director Oscar Sunday for "The Pianist."

But Polanski, who lives in France, couldn't attend the ceremony to accept his first Academy Award because he faces arrest if he returns to the United States.

There was no explanation for his absence; Harrison Ford, who announced Polanski's victory, gave the standard line when a winner is absent: "The Academy congratulates Roman Polanski and accepts this award on his behalf."

Now 69, Polanski was charged with rape and five other felonies in 1977 after having intercourse with a 13-year-old girl at Jack Nicholson's home while the actor was away.

As part of a deal with prosecutors, Polanski pleaded guilty to having unlawful sex with a minor, then fled Los Angeles for Paris in 1978 to evade sentencing.

The announcement sparked cheers from the crowd and a standing ovation from many, including fellow best-director nominee Martin Scorsese, who was up for "Gangs of New York."

Ronald Harwood, who'd won the Oscar for best adapted screenplay for "The Pianist" a few minutes earlier, said, "Roman Polanski deserves this. He's a great director and a wonderful colleague."

Polanski's nomination had triggered a spirited debate over whether it was appropriate to separate a person's misdeeds from his art and award Hollywood's highest filmmaking honor to someone facing a still-unresolved criminal case.

"He's a convicted felon and a fugitive, and that's not going to go away," Los Angeles County District Attorney spokeswoman Sandi Gibbons said in February. "You don't get a pass for longevity."

The survivor of Polanski's decades-old sexual assault wrote an opinion piece in the Los Angeles Times in February, apparently aimed at Oscar voters, saying his work should be judged on its merits.

"I don't really have any hard feelings toward him, or any sympathy, either," wrote Samantha Geimer. "But I believe that Mr. Polanski and his film should be honored according to the quality of the work. What he does for a living and how good he is at it have nothing to do with me or what he did to me."

Although he once vowed to resolve the case, Polanski has said in recent years that he's unwilling to jeopardize his life in Paris with his children and his wife, French actress Emmanuelle Seigner.

Polanski has three previous Oscar nominations: for adapted screenplay for 1968's "Rosemary's Baby," for directing 1974's "Chinatown," and for directing 1979's "Tess," an adaptation of the Thomas Hardy novel "Tess of the d'Urbervilles," about a young peasant woman whose life collapses after she's seduced by a wealthy older man.

Besides Polanski and Scorsese, this year's other nominated directors were Stephen Daldry for "The Hours," Pedro Almodovar for "Talk to Her," and first-time feature director Rob Marshall for the musical "Chicago," which won best picture.

"The Pianist," the true story of a classically trained musician hiding from Nazis in the ruins of Poland, echoes elements of Polanski's own life, when he escaped from Krakow's Jewish ghetto as a child and lived off the charity of strangers until reuniting with his father years later. His mother died at the Auschwitz Nazi death camp.

His life was marked by further horror in 1969, when his pregnant wife, actress Sharon Tate, and four others were murdered by followers of Charles Manson.
By ANTHONY BREZNICAN