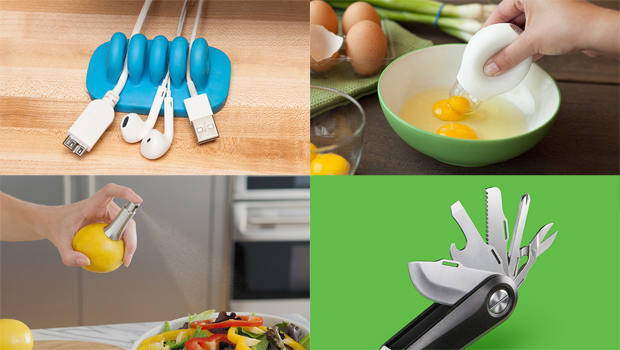 Today's quirky idea may be tomorrow's must-have consumer item. At least, that's the idea that drives the company Serena Altschul has been watching in action:

With all the beer and laughter, it looks a lot like a college improv show. But this weekly meeting in New York City is all business.

It's an unusual approach for a consumer products company that brought in $48 million in revenue last year -- unless, of course, that company is Quirky.

Quirky manages an international online community -- some 900,000 strong -- that submits, tweaks, and every Thursday night votes on all sorts of product ideas.

And what they vote on gets made.

"We're all creative people, right?" Kaufman said. "It's hard to get through a dinner without someone saying, 'Oh, wouldn't be cool if ...?' Or, 'I've got an idea for ...' And Quirky really captures that and gives those people a chance for the first time, literally, ever.

"The quickest we have gone from a Thursday night [meeting] to a retail store is about 29 days, and that was with Pluck" -- Quirky's egg yolk extractor.

The company is the brainchild of Kaufman, who started it five years ago, at age 21. "The company started with a three-word mission statement to "make invention accessible," he said.

What's usually inaccessible to most inventors are all the important steps after that "A-ha!" moment, and that's where Quirky jumps in.

With constant feedback from its vast online community, the Quirky team actually designs, markets, patents and manufactures the invention

Kaufman showed Altschul Quirky's R&D center. Most companies hide theirs behind locked doors, or you need security clearance. At Quirky, you walk in, and you can't miss it.

If a product makes it to the retail shelves, 10 percent of the revenue is shared with the inventor and every member of the website who helped along the way, whether it was voting on a color or even picking a name. Last year Quirky's inventors and its online influencers shared $3.8 million.

"People that don't know a lot about the invention process often are like, 'Well, that doesn't seem like a lot of money,'" said Kaufman. "And I just say, you know, find a better deal. Not in a cocky way, but just, like, literally find a better and more cost-effective way to bring your product to life."

The company currently has more than 100 products on sale, in stores like Target and Best Buy. Some of them - well, let's just say we were a tad skeptical about a citrus spritzer called Stem. To Altschul it looked like a real lemon.

From rubber bands with hooks to hot dog slicers, the ideas that get made into Quirky products can seem, well, quirky. But some are downright practical.

Maryland resident Garthen Leslie was struck by inspiration during his morning commute: "As I'm driving along I'm looking at these buildings, And each of these apartments seems to have an air conditioner sticking out of the window. And I started to wonder about how they managed that air conditioning.

"And then I started thinking, 'Wouldn't it be great if there was a way to actually control that and be able to turn it on just prior to my returning?"

The idea could have remained forever trapped in his notebook, but he submitted a proposal to Quirky, and within a few months the company, in partnership with GE, unveiled a Wi-Fi-enabled AC unit that can be controlled via smartphone.

"The big thing for me is seeing that real, live product that I could actually touch," said Leslie. "Actually I think when I did see it, I went up and I put my hands on it just to get that feel of, there was an idea I had and now it's a real, live product."

Garthens Leslie's air conditioner will be on sale by summer.

Altschul suggested that it was one of those things that's described as "We're gonna hit this out of the park."

"And I've been wrong before," Kaufman added.

So whether you're a student, engineer, or a stay-at-home mother of invention, Ben Kaufman and a very quirky community are banking on YOUR next big idea