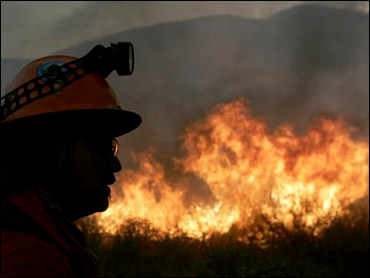 As the fight against the AIDS epidemic moves into its third decade, and experts gather for the first international AIDS conference in Africa, there is a growing consensus that education is simply not working to stop the disease.

CBS News Medical Correspondent Elizabeth Kaledin reports that with predictions that in some sub-Saharan countries, half of all 15-year-olds will die of AIDS, a vaccine is widely seen as the best hope.

"The answer to controlling the HIV epidemic globally is not treatment. The answer is prevention," says Dr. Anthony Fauci of the National Institutes of Health, "and integral to any prevention approach has to be a vaccine."

"It is the only way we can assure people throughout the world that they will be protected from this virus," said University of California at San Francisco Medical Center researcher Dr. Jay Levy.

Dozens of vaccines are in varying stages of development. A synthetic version is already being tested in people.

But developing a vaccine to fight HIV, the virus that causes AIDS, presents a unique challenge. Other viruses—such as polio, measles or mumps—float freely though the body and eventually get attacked by the natural immune system.

But HIV actually enters cells and never leaves, eluding the body's ability to fight it off.

"So we are dealing with an unprecedented situation where we don't have any benchmarks of what an effective immune response would be," said Fauci.

Because of those complications, researchers believe the quest for a viable vaccine will last at least another 10 to 15 years.

At UCSF, Levy is hunting for that elusive vaccine, which he thinks might require using the virus to defeat the virus.

evy's approach, being tried out in baboons, uses actual genetic particles of HIV to attempt to stimulate an immune response.

"The genetic material of the virus begins to make the proteins of the virus but it never makes an infectious particle," Levy explains. Other widely-used vaccines—such as the one given children to protect against measles, mumps ad rubella—use live viruses

In South Africa, the site of the 13th International AIDS Conference and the first of the annual gatherings of AIDS experts to be held in Africa, the focus is not just on when the vaccine will come or what it will be made of, but how poor countries will afford it.

The disease is ravaging the entire continent. Seventy percent of the 34 million people in the world who are infected with the virus that causes AIDS live in sub-Saharan Africa.

On a continent where many countries spend just $5 a year per capita on health care, few of those infected have any chance of getting access to the drug cocktails that have helped many of those infected continue to live healthy, productive lives in Western countries.

And with testing nonexistent in rural areas and the stigma associated with the disease so intense, many prevention efforts that do exist have fallen flat.

When the next wave of treatments—perhaps including a vaccine—arrives, the worry is how to provide equal access.

The U.N. estimates the disease has killed 19 million people worldwide. That's one reason why the United States has introduced a resolution in the UN Security Council that urges education and testing for all uniformed military forces but especially troops that serve as UN peacekeepers.

Even in Africa, there are signs such an effort could work.

Uganda, once plagued by an HIV rate of nearly 14 percent, now presents a picture of hope for Africa. After an intensive public-awareness campaign in partnership with civic and religious groups, the HIV rate has now plunged to 8 percent.