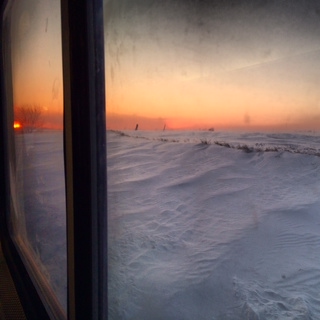 CHICAGO -- Most of the 500 Amtrak passengers who spent the night onboard three trains stranded in snow in northern Illinois are finally heading to Chicago, rail line officials said Tuesday morning.

About 300 passengers on two trains that were stuck near Mendota, about 80 miles from Chicago, boarded buses in Princeton for the final leg of their trip, Amtrak spokesman Marc Magliari told CBS News. The first bus arrived in Chicago around 7:00am local time, he said.

A third train loaded with 217 people spent the night at a BNSF rail yard in Galesburg; they were expected to take buses or another form of transport for the final 150 miles to Chicago.

The trains - The Southwest Chief from Los Angeles, the Illinois Zephyr from Quincy and the California Zephyr from the San Francisco Bay area - got stuck after 3 p.m. Monday in blowing, drifting snow and ice that Magliari said made the tracks impassable.

Several passengers speaking to news outlets by cellphone said conditions on the trains deteriorated and that they went long periods without food.

"The conditions is cold; we're wearing coats. And my husband is a diabetic. He hasn't had any food all day," Laurette Mosley told ABC News. "The bathrooms are flooded. The sinks are full with water and the toilets are flooded."

Mosely was traveling from California to Chicago to attend her mother's funeral.

Magliari said emergency workers were on standby, and that train crews handed out food and prepared for any medical issues, though he said there were none.

"There was no good reason to take people out of warm trains ... into the cold," he said. "We sheltered them in place."

Another passenger, Bryan Plummer, told ABC News that they were given dinner but no snacks during the 15 hours they were stranded.

"I inquired about breakfast service and they stated that at this time there was none planned. When the sheriff's officer that was on board here, when he left around 3 a.m. this morning, he stated that the Red Cross was involved and was trying to get us some meals," Plummer told ABC.

Amtrak canceled nearly two dozen trains in Illinois on Tuesday because of the cold and lingering snow from a weekend storm that dumped more than a foot of snow in some areas of Illinois.

The snow is part of a deep freeze affecting much of the nation.