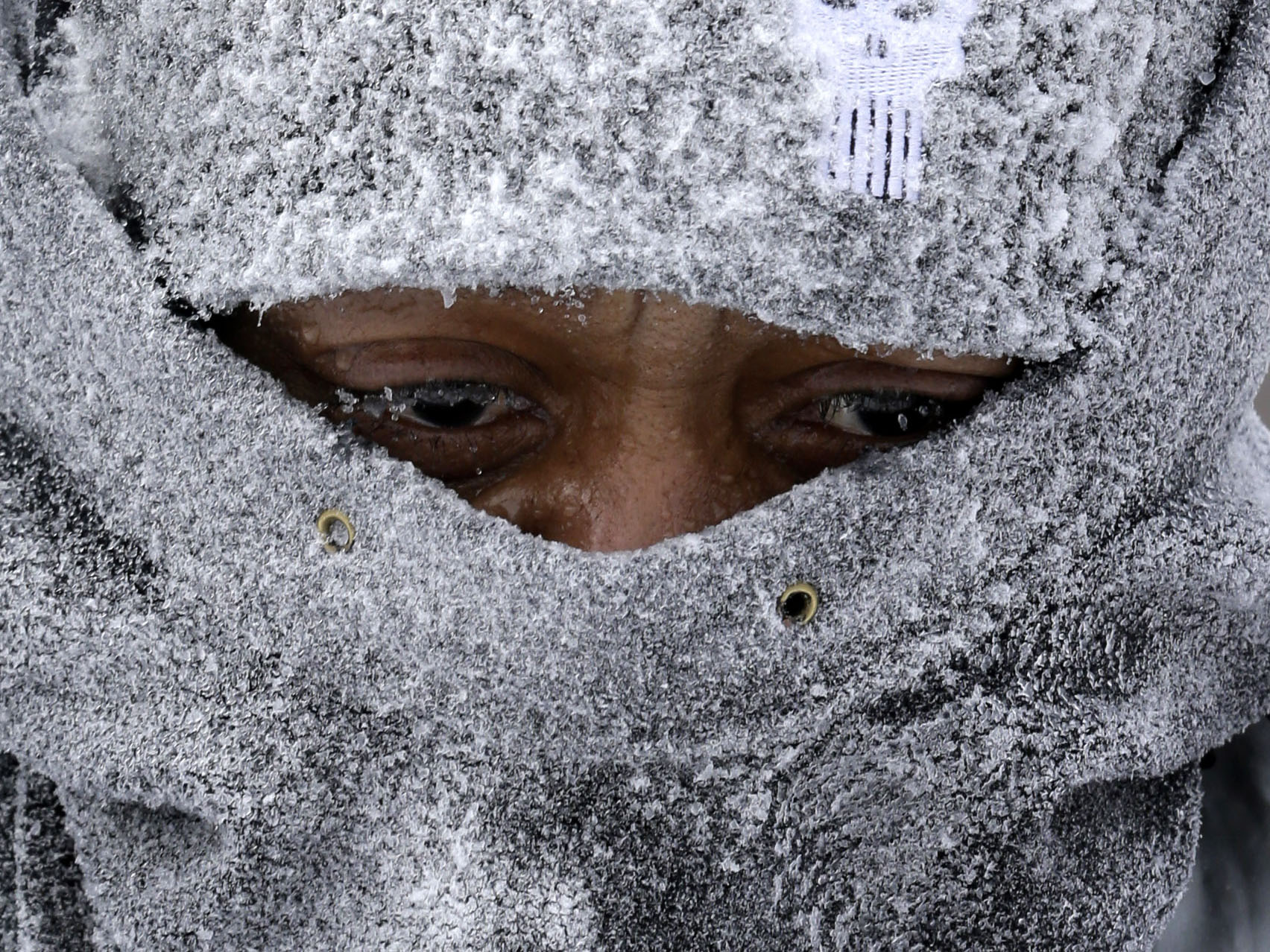 MINNEAPOLIS - The coldest, most dangerous blast of polar air in decades gripped the Midwest and pushed toward the East and South on Monday, closing schools and day care centers, grounding flights and forcing people to pull their hoods and scarves tight to protect exposed skin from nearly instant frostbite.

Many across the nation's midsection went into virtual hibernation, while others dared to venture out in temperatures that plunged well below zero.

"I'm going to try to make it two blocks without turning into crying man," said Brooks Grace, who was bundling up to do some banking and shopping in downtown Minneapolis, where temperatures reached 23 below, with wind chills of minus 48. "It's not cold - it's painful."

The mercury also dropped into negative territory in Milwaukee, St. Louis and Chicago, which set a record for the date at minus 16.

"I'm wearing a ski mask, two pairs of gloves. The only problem is my moustache keeps freezing!" a bundled-up mail carrier in Chicago told CBS News.

Wind chills across the region were 40 below and colder. Records also fell in Oklahoma, Texas and Indiana.

Forecasters said some 187 million people in all could feel the effects of the "polar vortex" by the time it spread across the country on Monday night and Tuesday.

Record lows were possible in the East and South, with highs in the single digits expected Tuesday in Georgia and Alabama. Subzero wind chills were forecast up and down the coast, including minus 10 in Atlanta and minus 12 in Baltimore.

From the Dakotas to Maryland, schools and day care centers shut down.

"You definitely know when you are not wearing your thermal undergarments," said Staci Kalthoff, who raises cattle with her husband on a 260-acre farm in Albany, Minn., where the temperature hovered around 24 below zero and winds made it feel like minus 46. "You have to dress really, really warm and come in more often and thaw out everything."

For a big swath of the Midwest, the subzero cold moved in behind another winter wallop: more than a foot of snow and high winds that made traveling treacherous.

Several deaths were blamed on the snow, ice and cold since Saturday, including the death of a 1-year-old boy who was in a car that went out of control and collided with a snowplow Monday in Missouri.

It took authorities using 10-ton military vehicles known as "wreckers" until early Monday to clear all the chain-reaction accidents caused when several semis jackknifed along snowy interestates in southern Illinois.

The crash stranded about 375 vehicles, but there were no fatalities or injuries, largely because motorists either stayed with their cars or were rescued and taken to nearby warming centers if they were low on gas or didn't have enough coats or blankets, said Jonathon Monken, director of the Illinois Emergency Management Agency. Others got stuck in the snowdrifts, including the Southern Illinois men's basketball team, which had to spend the night sleeping in a church.

In the eastern United States, temperatures in the 40s and 50s Monday helped melt piles of snow from a storm last week, raising the risk that roads would freeze over as the cold air moved in Monday night, said Bob Oravec from the Weather Prediction Center in College Park, Md. The snap was set to be dramatic; Springfield, Mass., enjoyed 56 degrees Monday morning but faced an overnight low of 6.

More than 3,700 flights were canceled by late Monday afternoon, following a weekend of travel disruption across the U.S. Airline officials said de-icing fluid was freezing, fuel was pumping sluggishly, and ramp workers were having difficulty loading and unloading luggage. JetBlue Airways stopped all scheduled flights to and from New York and Boston on Monday, and Southwest ground to a halt in Chicago.

At Chicago’s O’Hare International Airport, American Airlines trimmed its flight schedule, saying fuel was freezing and employees had to limit time spend in the extreme cold.

Brittney Leon, who was trying to get home to Alaska with her 9-month-old daughter, told CBS News she would have to wait for another week for a flight.

"We're supposed to fly out today and we're not flying out until (next) Monday now," she said.

Authorities in Indiana and Kentucky - where temperatures dropped into the single digits and below, with wind chills in the minus 20s and worse - warned people not to leave their homes at all unless they needed to go someplace safer.

Utility crews worked to restore power to more than 40,000 Indiana customers affected by the weekend storm and cautioned that some people could be in the cold and dark for days.

Ronald G. Smith Sr. took shelter at an Indianapolis Red Cross after waking up the previous night with the power out and his cat, Sweet Pea, agitated in the darkness.

"The screen door blew open and woke me up, and it was cold and dark. I got dressed and I was scared, thinking, 'What am I going to do? My cat knew something was wrong. He was jumping all over the place," Smith said. "This is brutal cold. The cold is what makes this so dangerous."

Even after Indianapolis lifted a travel ban, officials urged residents to stay home for their own safety and that of police and other emergency workers.

"It's still slick out there," said Marc Lotter, a spokesman for the mayor. "It's just not safe for people to be out on the streets."

Officials in Chicago and other cities checked on the homeless and shut-ins for fear they might freeze to death on the street or in their homes.

Between a heater that barely works and his drafty windows, Jeffery Davis decided he would be better off sitting in a downtown Chicago doughnut shop for three hours Monday until it was time to go to work.

He threw on two pairs of pants, two T-shirts, "at least three jackets," two hats, a pair of gloves, the "thickest socks you'd probably ever find" and boots, and trudged to the train stop in his South Side neighborhood that took him to within a few blocks of the library where he works.

"I never remember it ever being this cold," said Davis, 51. "I'm flabbergasted."

Elnur Toktombetov, a Chicago taxi driver, hit the road with hot tea and doughnuts, and an hour into his shift, his cab's windows were still coated with ice on the inside.

People are "really happy to catch the cab. And I notice they really tip well," he said.

Only a few hardy souls braved the cold on the Nicollet Mall in Minneapolis, normally a busy pedestrian area. Many people downtown used the extensive heated skyway system, where it is warm enough to walk around in office attire. Nearly all stores on the skyway were open as usual.

Jersey Devil Pizza & Wings was not.

"Apologies ... We are East Coast wimps. Too cold! Stay safe, see you Tuesday," read a sign taped to the door.