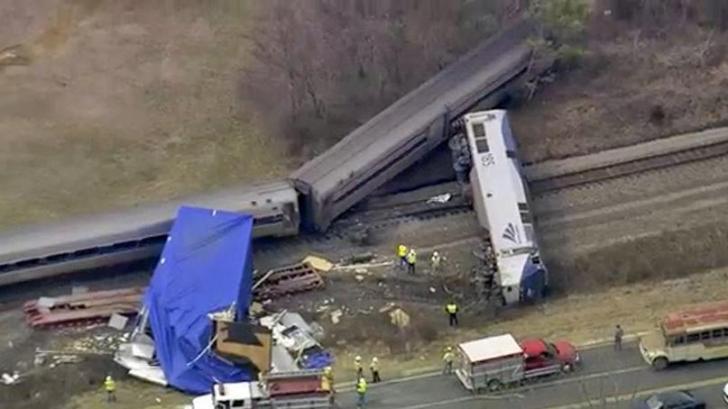 HALIFAX, N.C. -- An Amtrak train hit a tractor-trailer that stalled on railroad tracks in North Carolina, toppling the engine onto its side and injuring dozens of people, CBS affiliate WRAL reported.

Transportation officials say 40 passengers were injured when the accident occurred. They said 25 people were taken to Halifax Regional Medical Center by bus and 15 by ambulance after the collision.

Officials said none of the injuries appeared to be life-threatening. A bus will take another 173 passengers who weren't injured to Richmond, Virginia.

The first two cars of the train derailed after the collision, Temple said. The North Carolina Department of Transportation said in a news release that the other car that derailed was a baggage car.

Halifax County law-enforcement officials say the collision toppled the engine onto its side. An eyewitness says the tractor-trailer driver was trying to make a difficult right-hand turn. She says the driver jumped out of the truck before the crash.

Several people were hurt, though the transportation agency said the injuries were minor. The agency also said no deaths were reported.

It was not immediately clear how many people may have been hurt.

Sheriff's Major Scott Hall said from the crash scene that some passengers were taken to a local hospital by ambulance, but others were able to climb aboard a shuttle bus to be taken for examination.

Leslie Cipriani of Roanoke Rapids says the tractor-trailer driver was lingering on the tracks because he was trying to make a difficult right-hand turn on the other side. She said the truck backed up several times as the driver tried to make the turn.

A few minutes later, she said she heard the sound of the oncoming train and saw the cross bars hit the tractor-trailer. The driver then jumped out of the truck.

Cipriani shot video of the noontime crash on her telephone. She says a law enforcement officer was at the scene before it happened, but it wasn't clear whether the officer was there to help the tractor-trailer turn or because he knew the train was coming.

The Amtrak train was the Carolinian, which runs between Charlotte, North Carolina, and New York each day. It was headed north to New York City at the time of the crash.

Charlotte Story, a student at the University of North Carolina at Chapel Hill who was riding in the seventh car on the train, told WRAL that many people had what appeared to be minor injuries.

"There was a massive jerk and we were kind of thrown forward a little bit, and the train came to a sudden stop," she said. "I couldn't tell you if it was trying to slow down or not. There was no whistle. It came completely out of the blue."