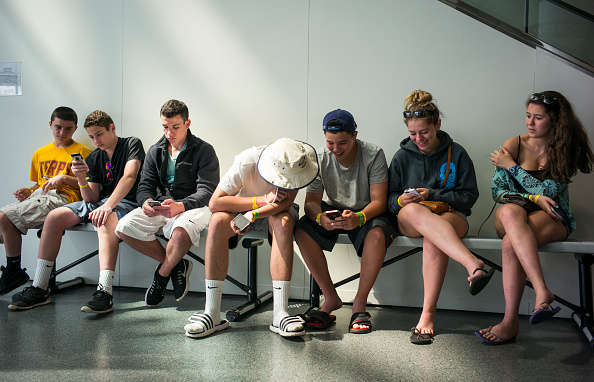 There's no doubt that teens can't get enough of their phones. Just look at a group of young people and you're bound to see a lot of faces bathed in the glowing blue light of a smartphone screen.

But not just any smartphone will do. Among teenagers, the iPhone reigns supreme -- and its popularity is only growing.

About 67 percent of teens own iPhones, up from 66 percent six months ago, according to a new study from investment bank Piper Jaffray that looks at teen consumer habits. What's more, 74 percent of the 9,400 young people surveyed intend to make an iPhone their next smartphone purchase, up from 72 percent last spring. Looking back over past surveys, the divergence between iPhone its competitors as the device of choice has grown. The popularity of iPhones has increased steadily while Android handsets fall out of favor. Today less than a fifth of teens opt for Android phones versus nearly a quarter two years ago.

The study paints a picture of an always keyed-in, social-media-consuming age group. Instagram was the most popular social network, with 33 percent of teens calling the photo-sharing app the most important social network they use. Twitter was next at 20 percent, closely followed by Snapchat at 19 percent. Facebook came in fourth, with 15 percent of teens giving it top honors.

Beyond social media, teenagers turn considerably more to video streaming services than traditional cable providers. About 38 percent of the age group used Netflix, for instance, versus 29 percent who have cable. Nearly half reported that they don't even need a cable service.

The trends from the Piper Jaffray survey are in keeping with similar findings from other studies. A Pew Research Center report that came out in April found that 92 percent of teenagers go online daily, with 24 percent reporting that they use the Internet "almost constantly." This study looked at people aged 13 to 17 and found that 6 percent reported going on only once-a-week. About 75 percent of those surveyed said they had access to a smartphone, and 91 percent use their mobile devices to go online at least occasionally.

Given the ubiquity of these media tools, are young people concerned about their privacy in an increasingly connected, content-sharing world?

A 2015 study commissioned by Intercede, a digital security company, and conducted by Atomik Research looked at a slightly older group, millennials aged 16 to 35 years old in the U.S. and the U.K. More than 95 percent reported that they thought their digital identity was not completely protected by online safeguards, and 68 percent believed risks to their online privacy would increase as social media-fueled digital information sharing becomes even more common.