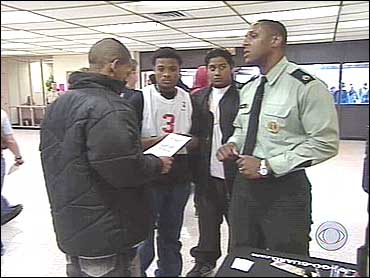 The Army suspended recruiting efforts Friday after reported excesses by recruiters trying to make up for a shortfall in new soldiers.

The one-day suspension was to allow commanders to emphasize ethical conduct and "refocus our entire force on who we are as an institution," said Maj. Gen. Michael D. Rochelle, the chief of Army recruiting, to reporters at the Pentagon.

Army officials said the stand-down would affect almost all 7,500 recruiters at 1,700 stations around the United States. Rochelle said the daylong halt could cost the service access to 1,000 potential recruits.

CBS News has reported that from asking teens to lie to their parents to guiding them through duping the drug-test system and forging documents, recruiters will go to many lengths to get young people to enlist. One Houston-area recruiter was

caught on tape
threatening jail time if an applicant didn't keep his appointment.

Each Army recruiter must enlist two people a month into the service. But the Army is 6,600 recruits behind where it wants to be at this point in the year, leaving questions whether the service will be able to fill every position needed to fight the wars in Iraq and Afghanistan.

Opinion surveys suggest that an increasing number of potential recruits and their parents are wary of the Army's recruiting pitch while soldiers are dying in Iraq.

Rochelle says recruiters taking shortcuts in recruiting "is simply not acceptable," CBS News reports. Almost 100 recruiters have been admonished and another eight have been relieved of their duties.

Rochelle said one problem has been with what the Army calls "influencers" — parents, coaches and others — recommending military service less often than they once did. After the Sept. 11 attacks, these influencers were likely to recommend military service 22 percent of the time, he said; now, Army studies show that figure has dropped to 14 percent.

African-Americans are also signing up in lower numbers, Rochelle acknowledged. He said he was unsure why.

Other Army officials have said during the incident in Houston, a recruiter allegedly threatened to have a wavering would-be recruit arrested if he backed out. The recruiter has no such authority.

Officials confirmed a second inquiry in Colorado, pointing to news reports about recruiters who allegedly offered information on fake diplomas and ways to get around drug tests and physical fitness requirements.

And, amidst the criticism of cut corners and threats by recruiters, CBS News Correspondent Jim Acosta reports that a little-known provision in the federal No Child Left Behind law gives these recruiters a secret weapon when aiming to recruit high schoolers, and catch the attention of students as young as 14.

To set up tables inside public high schools, a recruiter doesn't even need a permission slip. What frightens some parents is that the law also gives them access to each student's personal data, including address and phone number.

Army officials said last week they have investigated 480 allegations of impropriety by recruiters since Oct. 1. Some cases are still open, and 91 allegations have been determined to be founded. Eight recruiters have been relieved and another 98 have been admonished.

Since 2000, the Army has relieved between about 30 and 60 recruiters annually for improprieties, according to Army officials. These often involve recruiters concealing negative information about a potential recruit from rest of the Army.