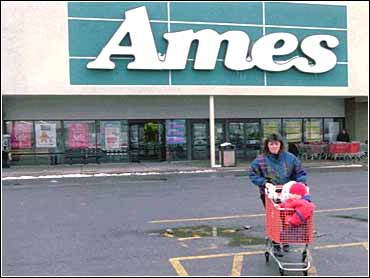 A year after seeking bankruptcy protection, Ames Discount Stores announced Wednesday it would close all 327 stores in the chain and wind down business.

Ames, which bought Hills Stores Co. of Massachusetts in 1998, became the nation's fourth-largest discount retail chain behind Wal-Mart, Kmart and Target. Its stores, mostly in the East and Midwest, employ about 22,000 people.

"This was a wrenching decision, but the right course to take. Continued softness in sales, combined with tightening terms and slower shipments from our suppliers, have reduced our funds availability below critical levels," Ames chairman and CEO Joseph R. Ettore said.

In its announcement, Ames said that, subject to the approval of the Bankruptcy Court, it expected to promptly designate a liquidator to conduct "Going Out of Business" sales at all Ames store locations.

The company said stores are expected to remain open for approximately 10 weeks during the process.

Ames filed for bankruptcy last August. It had hoped to emerge from bankruptcy protection by the end of the second quarter. The discount chain already has gone through four rounds of store closings in the last several months.