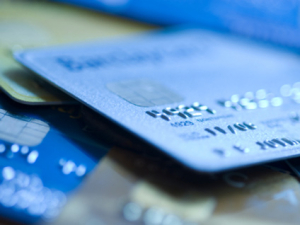 (AP) WASHINGTON - Americans stepped up their borrowing in May, helped by the largest one-month gain in credit card debt in more than four years. But overall credit card use is still well below where it was just before the Great Recession began.

The Federal Reserve said Monday that consumer borrowing rose by $17.1 billion in May from April.

The increase drove total borrowing to a seasonally adjusted $2.57 trillion. That's just below the all-time high of $2.58 trillion reached in July 2008.

Borrowing has increased steadily over the past two years. But most of the gain has been driven by auto and student loans. The category that measures activity in those loans increased by $9.1 billion in May to a record $1.7 trillion

A measure of credit card debt increased by $8 billion in May, the biggest one-month jump since November 2007. But overall level was rose to just $870 billion.

Credit card debt had totaled more than $1 trillion before and shortly after the recession began. The May level was only 2.2 percent above the low point hit in April 2011.

Consumers cut back sharply on their credit card borrowing during the recession and have only been posting modest gains over the past year.

And Americans reached for their credit cards in May as hiring slumped and consumer confidence tumbled.

In the April-June period, the economy created an average of just 75,000 jobs per month. That's down from a monthly average in the first three months of this year of 225,000.

The Conference Board's measure of consumer sentiment has fallen for four straight months. This index is closely watched because consumer spending accounts for 70 percent of economic activity.

The overall economy grew at a lackluster pace of 1.9 percent in the January-March quarter and many economists believe it slowed even further in the April-June quarter. Unless job growth picks up, consumer spending could weaken more and drag down economic growth further.

However, some economists believe the economy could get a boost in the second half from lower gas prices, which have been dropping sharply since April.

More borrowing is generally viewed as a healthy sign for the economy. It suggests consumers are gaining confidence and growing more comfortable taking on debt.

But it can also mean that more people are having trouble finding jobs and deciding to go back to school. Student loan debt has been rising sharply.

Households began borrowing less and saving more when the recession began and unemployment surged. While the expectation is that consumers are ready to resume borrowing, they are not expected to load up on debt the way they did during the housing boom of the last decade.