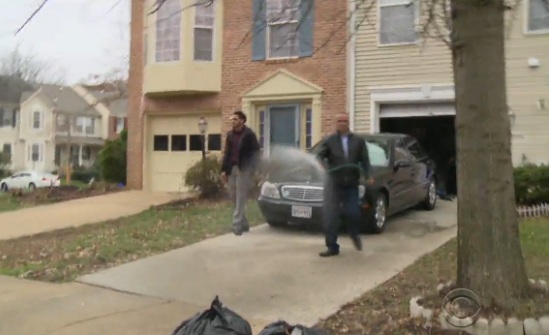 ERBIL, Iraq -- CBS News has learned the American who defected from ISIS and surrendered to Kurdish forces had left the D.C. area in mid-December.

Three months with ISIS was enough for him.

There was a single moment caught one camera when Kurdish soldiers found out they detained an American. The American tells the Kurds he's from the United States.

Minutes earlier, the Kurds had grabbed Mohamed Jamal Khweis, when he walked out of the scrub-land at dawn -- and right into their front line.

In broken Arabic and English, he told them he wanted to surrender.

One of the Kurds who arrested him -- but didn't want his face shown -- said Khweis confirmed he'd been fighting for ISIS.

And how did they make sure it wasn't a suicide bomber -- that he had no explosives on him?

"We got him to lift his shirt and drop his pants to prove it," one of the Kurds told CBS News.

That's standard procedure all along the Kurdish front lines. Anyone crossing has to strip to show they're not wearing bombs.

Twenty-six-year-old Mohamed Jamal Khweis had his Virginia driver's license with him, two credit cards and three cell phones -- along with about $4,000.

Khweis gave himself up at the village of Golat near Tal Afar, but the Kurds said it was a mistake. He had been aiming for the Turkish border, but was double-crossed by the smuggler hired to take him.

Back in Virginia, reporters showed up at the family home to ask questions, but a scene that started out merely chaotic, turned hostile when Khweis' father turned a water hose on them.

Khweis's parents say they had lost touch with their son and have no idea how he ended up where he is -- in the custody of Kurdish Intelligence.

It's not clear how long until he returns to the U.S. But the Department of Justice is already planning to file charges against him.