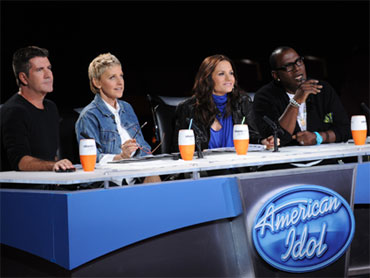 Ellen DeGeneres announced her "Idol" departure Thursday evening after one year on the show. Hours later, insiders were predicting in published reports that Kara DioGuardi will be getting a pink slip. And on top of all this, Simon Cowell's replacement is still a question mark.

There is little question that all these shake-ups are aimed at boosting ratings when the show returns for its 10th season next January. But will it work?

PICTURES: Who Will Be an "Idol" Judge?

Anne Marie Cruz, staff editor at People magazine, said on "The Early Show" Friday that these upcoming changes in the show are a "fantastic move" to help refresh the "Idol" brand.

"Now it's the biggest buzz and it's going to keep going until they figure out who they're going to have," she said. "Last year, wihen they announced Ellen, 30 million viewers for the first show."

With DioGuardi's reported firing, the show will return to a three-person judging panel, leaving two vacant judging spots, according to TMZ.

Friday morning rreports had Jennifer Lopez and Aerosmith front man Steven Tyler joining Randy Jackson, who is expected to be the only remaining 'Idol" judge, on the panel.

Tyler has yet to confirm or deny the rumor, but a source told People magazine that Lopez has closed a deal to replace DeGeneres as a resident judge. "It's true," said the insider. "She's excited about it."

The former "Fly Girl" has enough star power and could help reignite viewer interest for the ailing series.

Although "Idol" still remains as America's most popular television series, ratings are heading south. A total of 24.2 million viewers watched the ninth season's final duel between Lee DeWyze and Crystal Bowersox, compared to the nearly 29 million viewers who saw Kris Allen claim victory over Adam Lambert last year, according to the Associated Press.

So what's the reason behind "Idol's" diminishing popularity?

The "So You Think You Can Dance" judge has been highly critical of the judges table and told E! News in April that he would replace all the judges if was in charge.

"I think over the last couple of years, the show has been about the judges, whether it was Kara [DioGuardi] or Paula [Abdul] leaving or Ellen DeGeneres joining," Lythgoe said.

"It shouldn't be about the judges," he said. "It should be about the young talent. And once we get that into focus, the show will be successful again."

Looks as if Lythgoe may have gotten his way. The near swipe of panel judges could be tied to reports earlier this week that Lythgoe is expected to rejoin the show as producer again.

Nigel Lythgoe May Return for 10th Season of "Idol"

Fox has yet to offer any comment on all the casting rumors. However, the network is widely expected to announce the new judge's panel on Aug. 2 at the Television Critics Association event.