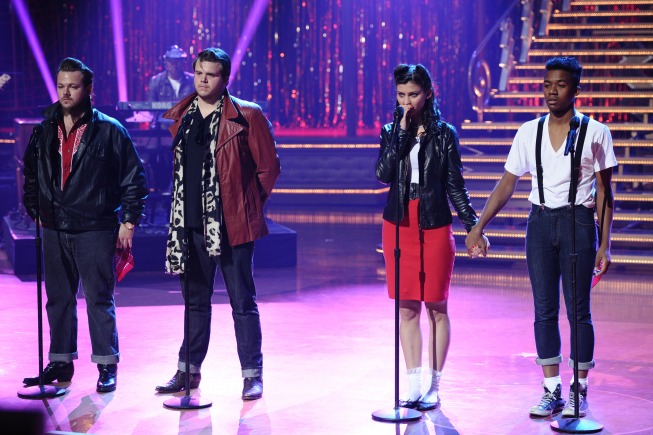 There were only 70 singers left in last night's "American Idol" auditions. They were almost there. The vocal coaches kept reminding them: relax.

Well, of course. Only 28 of them would be eliminated this time. So each of their chances were good. They could at least try to breathe.

When the first group came out-- featuring the enchanting country singer, Skylar Laine-- Jennifer Lopez gave them one instruction: "Relax."

At least it wasn't "collapse", which seemed like the instruction of the previous night. For this latest spectacle, the contestants were taken to Las Vegas to stay at the lovely Aria hotel, a place with sumptuous bathrooms and drapes that open electronically.

The electronic sophistication of the hotel was at odds with the necessity for the performers to sing songs from a barely electronic era: the '50s and '60s. Did this make the show somehow cheaper to make? Surely the Aria gave them all a favorable rate for the national exposure.

For long stretches, one could hear the echoing voice of Idol's ghost, Simon Cowell, sneering: "That was, you know, a little Broadway."

Sometimes, the ghost of "Glee" also wafted through one's flat screen. However, the group including Reed Grimm tried to make something slightly new and vaguely jazzy out of "The Night Has A Thousand Eyes." They succeeded--all of them.

When cowboy Ritchie Law paired up with Jermaine Jones, it seemed as if they might struggle, principally because Law has an ego larger than his hat and Jones is the gentlest of giants. "Breaking Up Is Hard To Do," was their song. It was like listening to a very bizarre--but not unpleasant-- re-incarnation of the Walker Brothers. (Please do Google them.)

"Where else would you hear that?" offered Jennifer Lopez, implying that only on "American Idol." Another answer might have been: in the last vintage record store in Idaho.

I guess it doesn't matter any more. No, that wasn't my opinion. That was the song performed by Jessica Sanchez, Candice Glover and Deandre Brackensick.

Brackensick has been largely hidden thus far. Yet here he was, having borrowed and dyed hair from previous "Idol" contestant Jason Castro, sending his voice to heights that would frighten many birds.

These three, who appear to enjoy more soul than several districts of Detroit during the '60s, ought to leave this show right now and make an album together.

The judges loved it. Then, a little fun. They told everyone who believed they were through on the first day that, well, maybe they weren't through after all.

They fed them nonsense about the 10 groups still to sing being, well, maybe potentially better, so, well, maybe all that stuff about being through to the next round, well, maybe might be bunkum.

Surely this would be the cue for at least a couple of collapses or vomiting sessions. But, no.

Joshua Ledet and Shannon Magrane wafted through on a wave of sheer talent and no perceptible nerves.

Britnee Kellogg and Courtney Williams were also told they were through. But really, just like the song they'd sung, they were being kept hanging on. Because, if the judges' words to the Day One group were true, there might still be further eliminations.

Surely, there would still be room for more dramatic cruelty.

As a warm-up, we had the screeching of vocal coach Peggi Blu: "There's no crying in music." Didn't she mean baseball? But you knew that Blu had a heart of gold covering that iron, as she walked over and wiped the tears from Lauren Gray's eyes.

"Are you on Ritalin?" she screeched again, as she wiped.

"No," came the insistent reply.

"Then focus," barked Blu, with clarity.

Gray, fearless and tearless, gave "Will You Still Love Me Tomorrow?" all she had. She still has a chance to be loved tomorrow--perhaps even next week.

Heejun Han, Jairon Jackson, Phillip Phillips and Neco Starr offered "I Only Have Eyes For You." There were troubled moments. But Peggi Blu's cuddly cajoling got them through. Or not.

Why lift all these kids' hopes when you know, by the end of the show, that you will shatter some? Well, because if you're "American Idol", you can. And it's fun.

We ended (or not) with Creighton Fraker, Aaron Marcellus, Nick Boddington and the vein-infiltrating voice of Jen Hirsh. They sealed it with a kiss. Except for Boddington, that is. He was given the kiss off.

"The performances are over, but the drama has just begun," intoned Ryan Seacrest.

Yes, everyone had been so very, very good that more singers needed to be cut to the quick. Surely, viewers in all four corners of America reached for respirators.

Remember Jairon Jackson? Remember Britnee Kellogg? Remember Candice Glover? They had, indeed, been told they were through. Now, they--and several others in their predicament-- were told they were out.

"My every performance was perfect," sniffed Kellogg through pained tears. "I don't get it."

It's television, Britnee. You're just an extra.

But don't worry, next week we're promised Steven Tyler mooning and then leaping into a pool in only his underwear.

So, you know, relax.