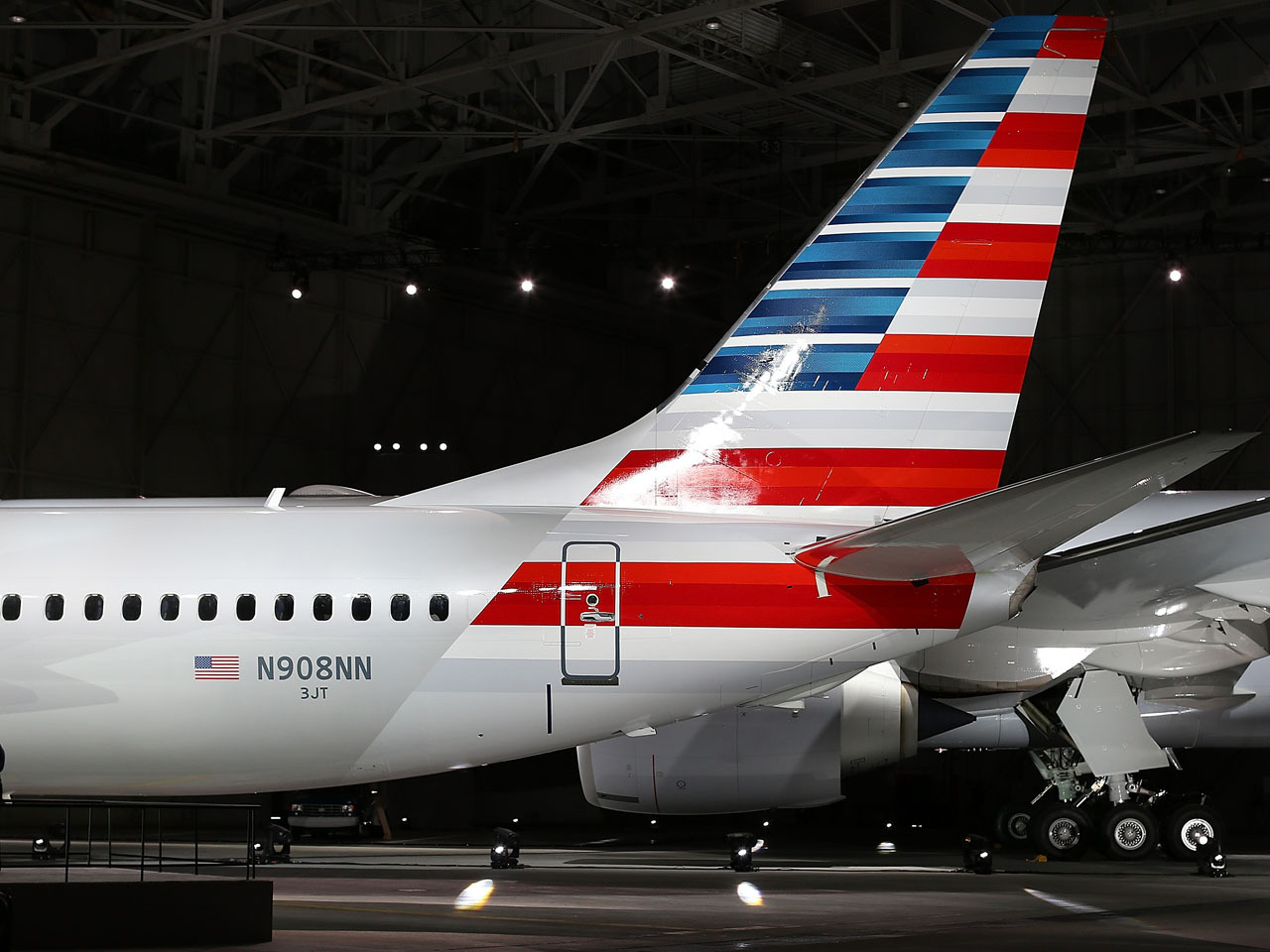 NEW YORK American Airlines is getting a new look.

The airline showed off the first plane bearing a new logo and paint job at Dallas--Fort Worth International Airport on Thursday.

The familiar red, white and blue stripes along the side of the fuselage are gone, replaced by a new logo and "American" in large letters on the silver body. Red and blue horizontal bars are emblazoned on the tail.

"We thought it was time to update the look - it's been 40 years," Thomas Horton, CEO of American's parent, AMR Corp., said in an interview.

The new livery was painted on a Boeing (BA) 777-300 that was flown into Fort Worth, Texas, overnight and was to be shown to the public later Thursday. The plane goes into service Jan. 31.

American expects about one-third of its fleet, or roughly 200 planes, will sport the new look by the end of the year with the rest to be repainted within five years. The makeover will extend to airport signs, self-help kiosks and American's website.

American declined to say how much the "rebranding" campaign will cost.

Horton said planning for the redesign began in the summer of 2011, when American announced it would buy hundreds of new planes from Boeing and Airbus, many of which will be made of composite material that can't easily be painted in American's traditional polished-aluminum look.

That means American was thinking of a makeover even before it filed for bankruptcy protection in November 2011. Horton said bankruptcy creditors were kept informed about the redesign. The desire to cut costs didn't derail the effort.

"We're very much coming to the end of the restructuring, and really all the cost-reduction initiatives have been bolted down," Horton said. "We really are at that moment now to turn the page and set the course for a new American."

Under pressure from creditors, AMR is studying whether to embrace a merger with US Airways (LCC) or remain on its own. A decision is expected soon, and Horton said the redesign doesn't tilt the company toward either outcome.

Horton said AMR did not tell US Airways in advance about the new livery - "That wouldn't have been appropriate; they're a competitor" - but he gave US Airways Group Inc. CEO Doug Parker a courtesy heads-up on Wednesday night.

US Airways praised the "compelling result" of the redesign, as spokesman Ed Stewart put it.

The pilots' union at American, which has long fought with AMR and wants company management replaced, was less enthusiastic.

"A new paint job is fine but it does not fix American's network deficiencies and toxic culture," said Dennis Tajer, a spokesman for the Allied Pilots Association. His and other unions at American support a merger that would put US Airways executives in charge of the combined airline.