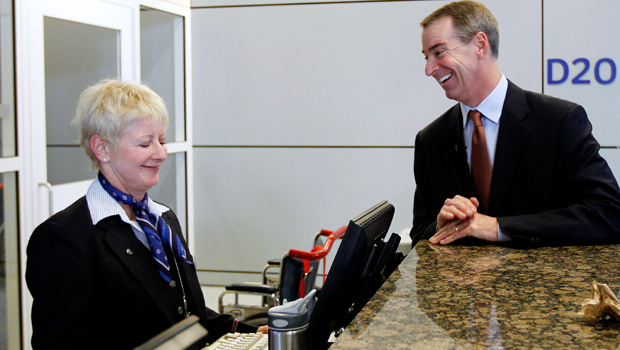 DALLAS Customer-service agents at American Airlines narrowly rejected a union's bid to represent them in collective bargaining with the company.

The airport and reservations-center agents voted against representation by the Communications Workers of America by 3,052 to 2,902, or 51 percent to 49 percent. About 76 percent of eligible workers voted, according to results released Tuesday.

The union said it lost votes because American has laid off 2,000 agents since it filed for bankruptcy protection in November 2011. Spokeswoman Candice Johnson said workers who were laid off had to give up job-recall rights to get severance payments, which made them ineligible to vote. "Those were union votes," she said.

The union could launch another organizing campaign, but rules approved by Congress last year would make it harder to force an election. The issue could come up again if American parent AMR Corp. merges with US Airways, whose agents are represented by CWA and the Teamsters.

American went all the way to the U.S. Supreme Court in a failed bid to block the election before it took place.

American argued that the union should have been required to show support from 50 percent of eligible workers before an election under a change in voting rules approved by Congress in February 2012. But the union argued that it only needed 35 percent support to force a vote under rules that were in effect when it filed for an election, and the courts upheld that view.

The agents are the largest bloc of nonunion workers at American. The airline's pilots, flight attendants and ground workers are represented by other unions.