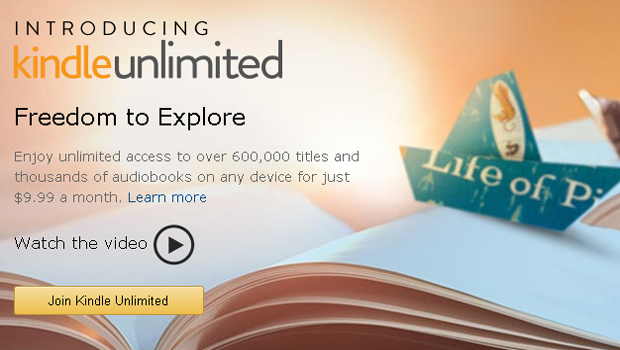 It's official -- Amazon has a new service that caters to book lovers, allowing them to freely read over 600,000 Kindle books and thousands of audiobooks.

Amazon officially announced the launch of Kindle Unlimited on Friday, after test pages for the new service were found -- and later taken offline -- earlier this week. The $9.99-a-month service is separate from the company's Amazon Prime service, which allows members with Kindles to borrow one bestseller a month from the Amazon's Kindle Owners' Lending Library.

The newest subscription service will allow users to read their books across many devices, including iOS and Android devices, Macs, and Windows devices. A stark contrast to the Lending Library, Kindle Unlimited offers popular books including the Harry Potter series, the Lord of the Rings trilogy and numerous others. Amazon also will offer audiobooks for numerous titles, including "Life of Pi" and the Hunger Games trilogy.

"With Kindle Unlimited, you won't have to think twice before you try a new author or genre -- you can just start reading and listening," Russ Grandinetti, senior vice president of the company's Kindle division, said in a press release.

On Wednesday, Gigaom had reported that test pages for the new service were seen by Amazon users enrolled in the company's Kindle Direct Publishing program. Users were speculating when the service would launch and noted that many of the books listed were either published through Amazon or already available through the Kindle Owners' Lending Library.

Kindle Unlimited directly competes with similar services. Oyster allows unlimited access to over 500,000 books for $9.95 a month, while Scribd, which has 400,000 titles, including bestsellers and original works.

This is one of two services that is not tethered to Amazon's Prime subscription, which includes free two-day shipping, streaming videos and music. The other service not linked to Prime is Kindle FreeTime Unlimited, a selection of hand-picked titles of games, videos and books for children and parents. However, unlike Kindle Unlimited, it is only available for users with Kindle Fire tablets.