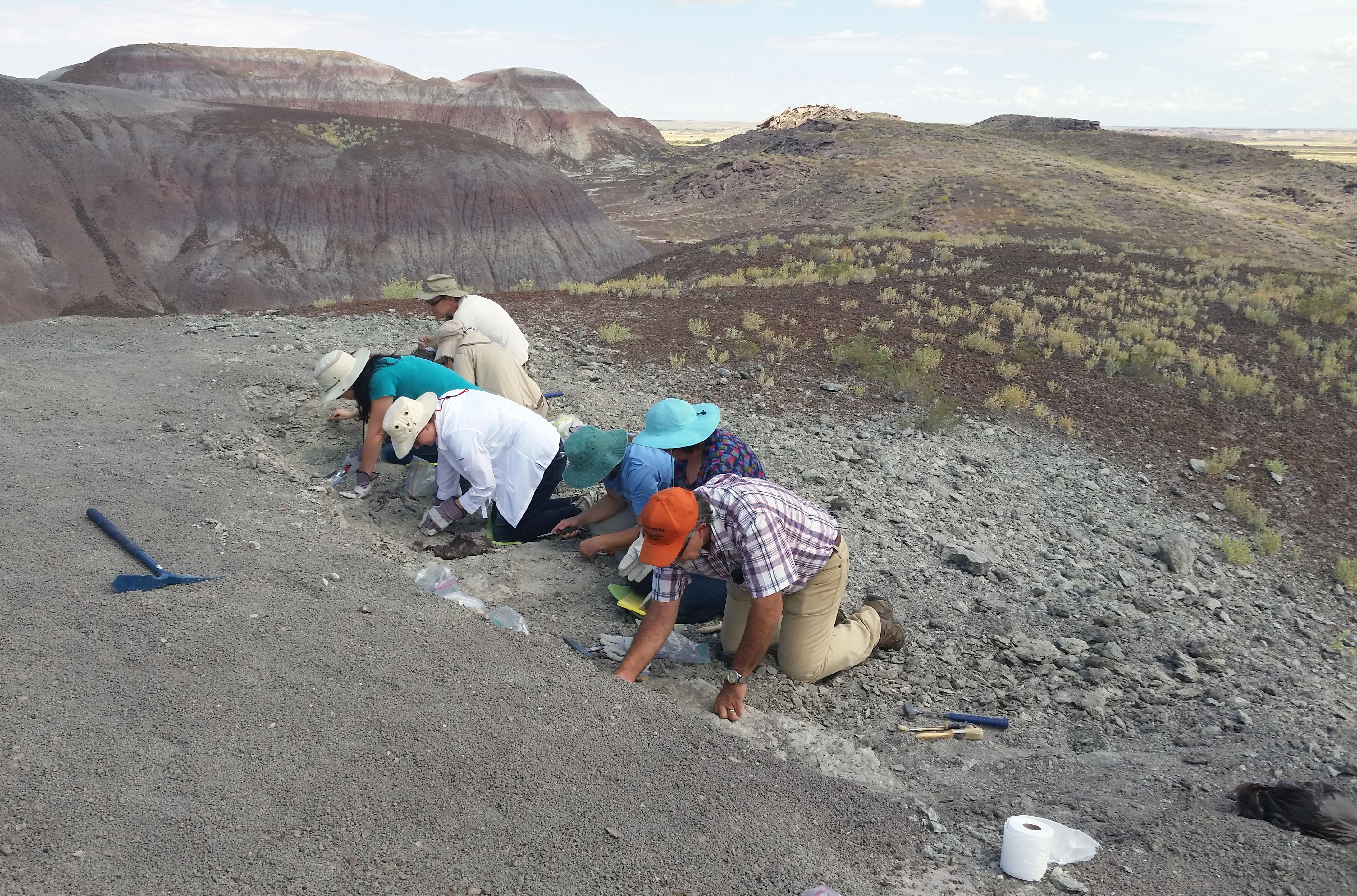 Growing up, Stephanie Leco often would dig in her backyard and imagine finding fossils of a tyrannosaurus rex. She was fascinated with the idea of holding something in her hand that was millions of years old and would give her insight on how the world evolved.

Safe to say, she hit a paleontology jackpot this summer with the discovery of a jaw bone from a long-snouted fish at Petrified Forest known to exist more than 220 million years ago.

Leco was part of the first dig for citizens held last month at the national park near Holbrook that routinely turns up fossils from the dawning age of dinosaurs and has vast expanses of rainbow-colored desert.

The fossil about the size of a pinky fingernail was unearthed from the site of what was a lake or pond during the Late Triassic period when the fish were thought to be extinct in North America. Scientists knew closely related fish were present around the world in the Early Triassic period, about 10 million years earlier, but the fossils were found only in China in the Late Triassic, said park paleontologist Bill Parker.

"People who actually study this group of fish might start setting their sights in our direction now," he said.

Leco was sifting through loose dirt on a barren hillside using her background in art to differentiate the colors, patterns and textures among bones, rocks and charcoal when she zoomed in on an area looking for smaller objects. She already had several small teeth in her collection and was marveling at the tibia of a plant lizard that another participant found before coming across the jaw bone. Not knowing what it was, she handed over the fossil that had broken teeth to Matt Smith, the park's lead fossil preparer, and asked what it was.

They wrapped up the jaw bone, placed it in a tin and took it to the lab, looking at it more closely under a microscope, she said. The park later emailed her to say it was a fish closely related to the genus Saurichthys.

"Okay, it wasn't a T-Rex," the Phoenix resident wrote in an email to The Associated Press. "But, honestly, I feel like this is much cooler!"

Leco, 26, said she's since developed an even deeper fascination with paleontology and bought a couple of books on the Triassic period so that she can speak with authority about her find. The period, which started about 250 million years ago and lasted 50 million years, followed the largest extinction of life on Earth when the land mass was a single continent and had the first dinosaurs.

The full jaw of the fish would be about three to four times longer than the fossil Leco discovered, Parker said. He said other fossils of the fish might also be found on the East Coast and on the Colorado Plateau where similar rock is exposed.

Ben Kligman, a senior at the University of California, Berkley, has been studying the pond site preserved in a six-inch layer of rock. He plans to return to Petrified Forest next summer to look for a full fossil of the fish to determine whether or not it's a new species. What he didn't know before Leco found the jaw bone is that he already had smaller pieces of the fish that he couldn't identify as such, he said.

"Although it's probably a new species, we can't say that it is yet because we don't have enough specimens," Kligman said.

Other citizens participating in the August digs found the vertebrae of a long-necked lizard first uncovered in the park last year and the teeth of a large carnivorous reptile, both considered rare in the park's fossil record. Their names will accompany the collections at the park, which will use them to reconstruct the habitat of the pond and get a better idea of where the animals fell in the food chain, Parker said.

"Anytime we can fill in gaps in the fossil record, it's really important," he said. "People who don't study Triassic fish may not be excited. The fact you can find new stuff is the real takeaway."