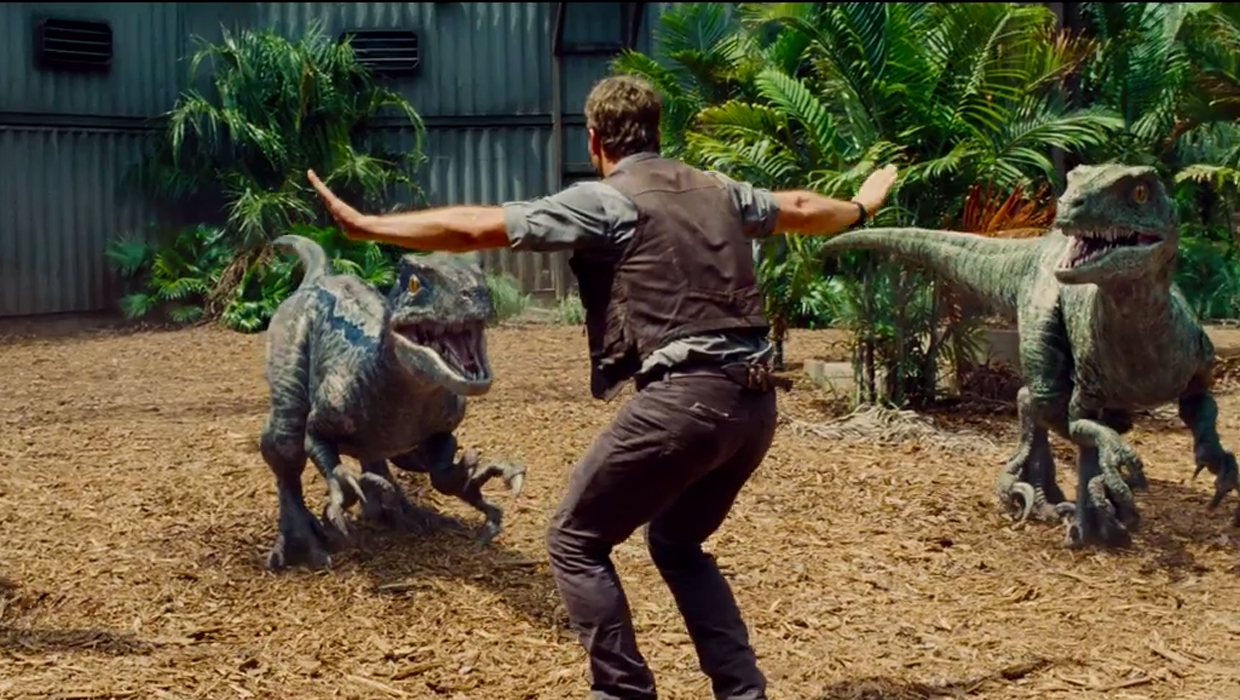 With "Jurassic World" hitting theaters Friday, paleontologists like James Kirkland are girding for the dumb questions they will they get from young dinosaur enthusiasts.

Kirkland, the state paleontologist at the Utah Geological Survey who has been involved in the discovery of 20 dinosaurs including the Utahraptor, admits such Hollywood blockbusters could inspire a whole new generation of fossil lovers. Yet, he frets that this movie - much like its three predecessors - will be filled with so many factual errors as to spread misinformation.

"You deal with these inaccuracies over and over every time you give a talk," said Kirkland, who says he still must dispel falsehoods from earlier movies such as a belief that Tyrannosaurus rex had an awful sense of smell and could not see you unless you moved, and that raptors could talk to each other and open doors.

"It gets really old after a while," "If they wouldn't do that, we wouldn't have to deal with this. We could step to the more interesting issues like what we are discovering next."

He is not alone. Several paleontologist interviewed by CBS News described the movie - and the toys, books and other products inspired by it - as a disappointment and a "missed opportunity" to provide a scientifically sound storyline while ensuring fans are still entertained.

The plot will be familiar to anyone who has seen any of Steven Spielberg's original trilogy, the last of which came out 14 years ago. Directed by Colin Trevorrow, "Jurassic World" revolves around a dinosaur theme park in Costa Rica that includes the genetically engineered Indominus rex. The dinosaurs break lose and go on a rampage, forcing visitors to run for their lives.

Though most paleontologists haven't yet seen the movie that is set to open June 12, they have picked apart the trailer and movie-inspired toys for evidence about the way dinosaur anatomy and behavior are portrayed. And they have found plenty to complain about.

No, the Pterosaurs couldn't have lifted people up into the air - their feet were not able to pick up items. They got the Gallimimus all wrong, giving it teeth in its jawless beak and getting the proportions out of whack. And for some reason they forgot to put feathers on Velociraptor and Gallimimus, giving them scaling or smooth skin instead and ignoring one of the biggest advancements in paleontology over the past two decades.

Paleontologists praised the Mosasaur that jumps from a Sea World-like pool for having interior "palatal" teeth, which is something scientists only recently discovered. But others complained it was much bigger in the movie than it would have been in real life.

"For all its errors - and there definitely were some - the original 'Jurassic Park' movie was very effective about bringing the then-new 1980s discoveries to people of the 1990s," Thomas R. Holtz, Jr., a vertebrate paleontologist at the University of Maryland, told CBS News. "Sadly, the dinosaurs in 'Jurassic World' have not been updated with any new information from the 1990s or 2000s or 2010s, and indeed in a few cases are less accurate than in the original movie!"

Andrew Farke, who specializes in the evolution and functional morphology of the Ceratopsians (horned dinosaurs) at the Raymond Alf Museum of Paleontology, agreed "the dinosaurs are a step backwards" and that they are not much too look at.

"The plot might be OK. I think it's quite fun to have a peek inside a functioning dinosaur theme park," he said. "But the dinosaurs themselves...ugly! Across the board, a major step backward for the visuals and accuracy."

Kirkland said he is not so annoyed that script writers have introduced a genetically modified dinosaur known as Indominus rex - calling it a plot device and a handy bad guy. He seemed more upset about the lack of dinosaur diversity and the absence of some of his new favorites - Deinocheirus, Therizinosaurus, Kosmoceratops, Styracosaurus, and Gastonia.

He also took aim at the Hollywood version of raptors, suggesting the movie portrays them almost as Bambi-like creatures compared to the ones he has dug up.

"They could have made it look like they had this attacking dinosaur that was bigger than T. rex, that would intimidate the large animals these things would have normally preyed on," he said. "They could have seriously made these guys as intimidating. It actually could have been something you actually looked at as being somewhat nice."

No one from Universal Pictures responded to a request for comment.

But molecular biologist Jack Horner, who wrote the 2009 book "How to Build a Dinosaur" and consulted on all four movies, said criticism of the science was misplaced.

"It's a movie, a fictional movie. The last thing it needs to be is scientifically grounded," said Horner, who mostly advised on the creation of the new dinosaurs in "Jurassic World" including Indominus rex, which "came out of the imagination of a few us."

"Steven Spielberg and Colin and everybody were interested in at least having as much grounded as possible but without ruining the movie," he continued. "They wanted the dinosaurs to be as accurate as possible. But once they are accurate looking, they become the actors and they obviously do thing that real animals wouldn't do - like chasing people all over the place and breaking into buildings just to eat a person."

Told how Kirkland and others are aghast at how some dinosaurs are presented, Horner said this isn't a documentary and shouldn't be judged as such. Comparing it to "Jaws," he noted that sharks "don't eat boats to get to people."

"Every time a Jurassic Park movie comes out, it raises the public's awareness about dinosaurs," he said. "If it were a documentary and therefore pleasing for Mr. Kirkland, it wouldn't get near as many people to it, and documentaries don't always have everything right either."

Indiana University's James Farlow agreed, saying it's simply unrealistic to expect Hollywood to be scrupulous about the science in science fiction movies.

"To be honest, I have been watching and loving cheesy science fiction movies since the 1950s. I don't think any 'Jurassic Park' movies subsequent to the first have been meant to be scientifically based, but rather attempts to cash in and make big bucks," he said. "I imagine, without having seen it yet, that 'Jurassic World' is just one in a long series of such movies, going all the way back to Harryhausen's 'Beast from 20,000 Fathoms,' or even before that. Great fun, but not to be taken seriously. Godzilla lives."

Paleontologists like Ohio University's Lawrence M. Witmer said he gets that this is a movie but finds it "a little bit lazy to not make the animals be scientifically accurate when they can."

"I understand that the plot may dictate some departures from what science knows to be true, but otherwise, they could really try to enhance the scientific accuracy. In fact, they could have enhanced the reception of the movie by doing so, just as the comic-book movies will drop Easter eggs in scenes that show that the filmmakers indeed respected the canon of the source material."

Holtz agreed, saying that the "'Jurassic Park' franchise has always been promoted as using the latest science."

"Yes, they are clearly fiction. But the promotion of these has seen today's science used to tell a fictional adventure," he said.

"They (say) it isn't a documentary, but people treat it much like they treat historical films like Gandhi or Lincoln or Braveheart where settings are changed, events happen out of sequence, and sometimes multiple historical figures are fused into single movie characters," he continued. "No one would assume the dinosaurs in 'The Land of The Lost' or similar movies are accurate, but people tend to treat the 'Jurassic Park' dinosaurs as if that is truly the way they are. And it isn't really the public's fault, because Universal promoted them as such."

Still, even critics like Kirkland acknowledge they will be among the first in the theater when the movie opens. And though they may cringe more than once, dinosaur lovers acknowledge they can at least enjoy the fact that these prehistoric beasts are going to be center stage - as both heroes and villains.

"I can get away from reality with the best of them and have a good time," Kirkland said, with a hearty laugh. "I'm sure the movie will be paced well and entertaining. But I was hoping for a little bit more."