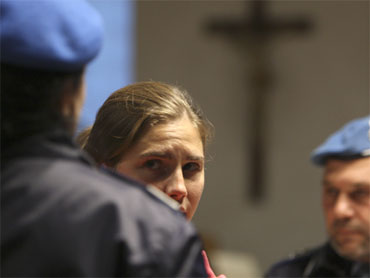 Prosecutors requested life sentences Saturday for an American student and her former Italian boyfriend accused of killing a young British woman in Italy.

Prosecutor Giuliano Mignini asked a jury in Perugia to convict Amanda Knox and Raffaele Sollecito on charges of murder and sexual violence for their alleged role in the 2007 slaying of Meredith Kercher.

Knox, who is from Seattle, took a deep breath when Mignini made his request. Life in prison is Italy's stiffest punishment.

She then addressed the court, saying that the accusations against her were "pure fantasy."

"Meredith was my friend, I didn't hate her," she said in Italian, fighting back tears.

Mignini argued that Knox, Sollecito and a third man who was convicted in a separate trial killed Kercher during a drug-induced sex game.

The Briton's body was found on the morning of Nov. 2, 2007, in the apartment she shared with Knox.

CBS News correspondent Sheila MacVicar reports that forensics in the case, including the alleged murder weapon, are sharply disputed. Defense experts said the knife entered as evidence could not have caused the wounds to Kercher's body.

If convicted, it will be because Knox didn't have a strong enough defense strategy in place.

A verdict is expected in early December, MacVicar reports, and both sides have said they will appeal.

In her closing remarks Saturday, prosecutor Manuela Comodi said evidence presented during the trial had shown that the defendants' cell phones were switched off the night of the crime, making their whereabouts impossible to trace.

Comodi also recalled testimony by expert witnesses who said Sollecito's computer had not been used during the hours Kercher was stabbed to death.

According to Knox, who took the stand last June, the two suspects went to Sollecito's place to watch a movie on his computer on Nov. 1 and spent the night there, smoking pot and having sex.

The Briton's body was found on the morning of Nov. 2 in the apartment she shared with Knox.

The 21-year-old woman is believed to have died between 9 p.m. and 11 p.m. on Nov. 1, based on the autopsy and the accounts of friends with whom she had eaten dinner that night, according to court documents.

Prosecutors argued Friday that Kercher was killed during a drug-fueled sex game. They said Knox had a growing hatred for the victim and killed her, together with Sollecito and a third man, under "the fumes of drugs and possibly alcohol."

Rudy Hermann Guede from Ivory Coast was sentenced to 30 years in prison last year for the killing. He is appealing his conviction.