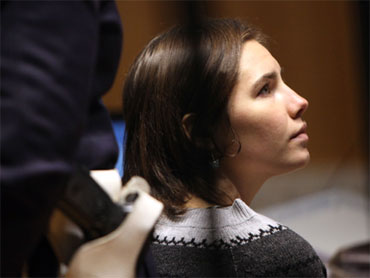 There was no hint when a pale and anxious-looking Amanda Knox arrived in an Italian appeals court that she would soon beg for her 26-year sentence and the 25-year sentence of Raffaele Sollecito to be overturned.

CBS News correspondent Allen Pizzey reports that in an emotional appeal, Knox said both she and Sollecito are in jail for a crime they did not commit - the 2007 murder of her roommate, Meredith Kercher.

The appeals trial formally opened last month but that hearing was immediately adjourned. With Saturday's hearing, the new proceedings got into full swing.

In her 20-minute address to the court, Knox said she is the innocent victim of an "enormous mistake."

"I am innocent. Raffaele is innocent. We did not kill Meredith," said Knox, speaking Italian, her voice breaking. "It doesn't do justice to Meredith and her loved ones to take our lives from us.

"We are innocent," she said, "and deserve to live our lives free."

Knox told the three judges and six jurors, "I am not the person that the prosecution insists that I am - dangerous, diabolical, jealous, uncaring and violent. I have never been so. The people that know me are witnesses of this."

The appeal process is, in effect, a new trial, and Knox's legal team is disputing the forensic evidence and wants to call new witnesses.

Silence fell on the courtroom as Knox started speaking, with her step-father Chris Mellas and her university friend Madison Paxton in attendance. Paxton, who was crying during her friend's speech, said later she had never been "so proud of anybody in my life."

Knox has addressed the court in the previous trial but never for as long or as passionately.

"I stand here more scared than ever, not because I am or I have ever been afraid of the truth," she said, "but because the truth has not been recognized."

She was in tears as she said she thinks of Kercher as a dear friend she is "grateful and honored" to have met.

Addressing the family of the victim, found with her throat slit in the cottage the two shared, Knox broke down.

"I must say I am sorry," she said. "It is impossible and unacceptable what they are suffering and what Meredith suffered. I am sorry all this has happened, it isn't right and it never will be.

"I, too, remember Meredith, and my heart is broken for you all, a tearful Knox said. "I'm very sorry Meredith is no longer living. I, too, have little sisters and the idea of their suffering, their loss, terrifies me.

"What you are going through, and what Meredith was subjected to, is incomprehensible and unacceptable," she said.

The victim's father, John Kercher, wrote a piece in Britain's Daily Mail lamenting the fact that "since that act of horrific violence, Knox, it seems, has been accorded the status of a minor celebrity."

Kercher wrote that Knox's parents "have never expressed their condolences to our family for our grievous loss."

"There has been no letter of sympathy; no word of regret," he wrote. "Instead, I have watched them repeatedly reiterate the mantra of their daughter's innocence."

Knox said she had been living in darkness for the past three years, and was more scared than ever, but still had hope for justice, even though it had failed her and Sollecito.

She said she regretted not being able to fully speak her mind before, saying that words don't come easily to her and that she has a difficult time standing up for herself.

The prosecution is asking for Knox's and Sollecito's sentences to be increased to life imprisonment.

But in Italy, 50% of criminal convictions are either overthrown or reduced to a lesser charge and sentence on appeal.

Knox said it took her time to come to terms with her new life, saying "I was in prison, my photo was everywhere." She lamented what she said were "insidious, unjust, mean" reports of her private life.

While the American press has largely been sympathetic to Knox, reports in Britain and Italy have often described her as a devious, manipulative woman.

"I can never get used to this broken life," she said. "I still don't know how to face all this, except than to be myself."

In their December ruling, the court said that on the night of the murder, Knox and Sollecito were at the house with a fourth person, Rudy Hermann Guede, an Ivory Coast citizen who has also been convicted of murder in separate proceedings. Knox and Sollecito assisted Guede's sexual desire for Kercher, becoming her brutal assailants together with the Ivorian man and ultimately killing the 21-year-old when she resisted the sexual approach.

"How is it possible that I should have jumped at the opportunity to hurt my friend, be violent as if it were the natural thing to do?" Knox asked the court.

At the appeals trial, the defense lawyers for Knox and Sollecito are seeking a full review on the forensic evidence, including on disputed DNA evidence that was found on a knife allegedly used in the murder, and on the clasp of Kercher's bra.

The defense maintains that DNA traces were inconclusive, and also challenged that they may have been contaminated when they were analyzed. They also want new testimony to be heard.

The court is expected to rule on these requests at the next hearing, Dec. 18.