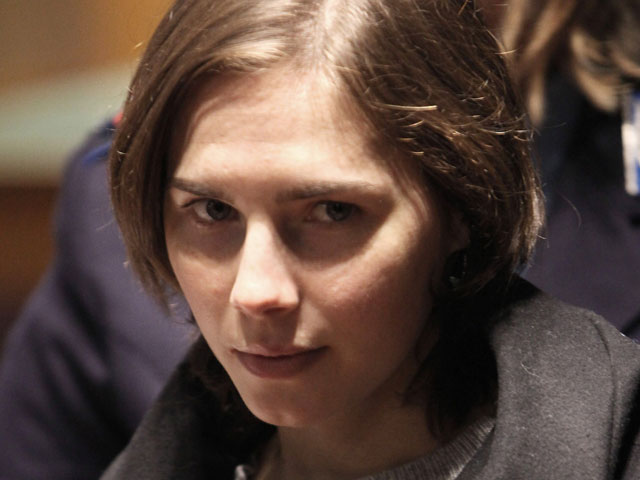 (CBS) Amid much hulabaloo,  the Lifetime Network on Monday aired its two-hour movie about the murder of Meredith Kercher in Perugia, Italy, in November 2007. The movie, "Amanda Knox: Murder on Trial in Italy," starred Hayden Panettierie in the title role and Marcia Gay Harden as Amanda Knox's mother.

The production was filled with factual errors.

In December 2009, Seattle student Amanda Knox and her former boyfriend, Raffaele Sollecito, were convicted of murdering Knox's roommate, Kercher, in a house the two women shared in Perugia. Also convicted earlier in the case was Rudy Guede, a local thief.

Last year, Amanda Knox told an Italian author that she was "guided too long by stubborn naivety which created confusion." Hayden Panettiere, who plays Knox in the TV movie, tells interviewers that she has no opinion about Knox's guilt or innocence. Panettiere may have used Knox's own self-evaluation as a springboard to interpret the young woman's character on screen. In the Lifetime film, Amanda Knox appears to be very confused at critical moments in the drama.

The Lifetime film is not a documentary. Lifetime said the movie was only "Based on a true story." On its webpage, Lifetime lists "Five Facts You Should Know About the Amanda Knox Movie." The "facts" describe where the movie was shot (Rome and Tivoli) and how long it took to shoot (five weeks).

Crimesider has come up with its own list, "Five 'Movie Facts' About the Amanda Knox Case That Are Incorrect" - the five biggest whoppers in the movie.

One: Amanda Knox's blood was mixed with the victim's in several spots on a bathroom sink.

The facts are that Meredith Kercher's blood was mixed with Amanda Knox's DNA, not her blood. The two women shared the same bathroom. In the trial of Rudy Guede, the judge said the bathroom DNA evidence was meaningless and threw it out of the case.

Two: the movie shows Amanda Knox hanging out with Rudy Guede and buying drugs from him.

There is no evidence that any of this happened.

Three: Amanda Knox told one of her Italian roommates that Meredith Kercher's throat was slashed.

The movie suggests this happened just hours after the murder. The prosecutor, in the movie, knows there was no way for Knox to have known exactly how Kercher died unless Knox was the killer. Knox never told her roommate that Kercher's throat was slashed.

Four: A store owner immediately tells the police that Knox bought cleaning supplies in his shop the morning after the murder. The prosecutor believes it is evidence that Knox tried to clean up the crime scene.

When the store owner was first interviewed by the police, he did not mention Knox coming into his store to buy cleaning supplies. The shop's other worker testified that Knox never came into the store the morning of the murder.

Five: The prosecutor and police all speak English. So when Amanda Knox is being interrogated, she is being questioned in English. Knox is able to understand everything that she is being told and, in turn, her responses are understood by all the Italians questioning her.

The prosecutor does not speak English. The police interrogators did not speak English. Knox had only been in Italy a few weeks. Her Italian was limited. An interpreter was only brought in at the very end of the overnight questioning.

For more of these Knox movie errors, check out Candice Dempsey's list at SeattlePI and Nikki Battiste's at ABC News.

The pre-show buzz before the Lifetime movie aired was impressive. Lifetime had every reason to believe their Amanda Knox movie would be a ratings hit. It wasn't. Did the long list of errors have anything to do with the ratings? Who can say?

Given that claims of satanic ritual plagued the Kercher case for years - and the fact that Amanda Knox was labeled a "she-devil" at her trial - maybe Lifetime should consider a remake of the Salem Witch Trials; a case of mass hysteria and profound errors. Perhaps Hayden Panettiere could play Sarah Good, a "witch" who was hung in 1692.


Doug Longhini is an investigative producer for CBS News' 48 Hours | Mystery. Mystery. He has been covering the Amanda Knox case since November 2007.