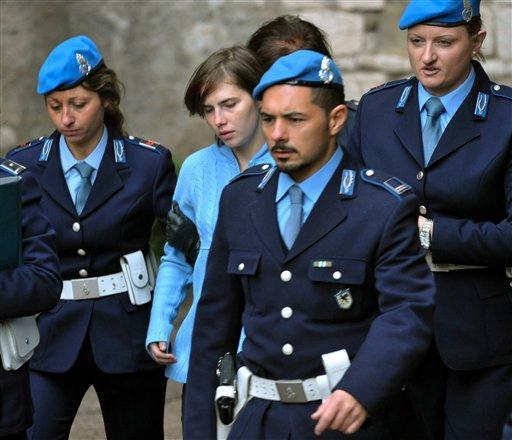 PERUGIA, Italy (CBS/AP) After three years in prison, Amanda Knox returned to court for a second chance at freedom for a hearing that was billed as "Amanda Knox's last chance" - a hearing that lasted a mere fifteen minutes.

The defense asked for a postponement until Dec. 11, so "the trial could begin in an atmosphere of tranquility and serenity," and the prosecution agreed.

Wearing a pale blue sweater against the damp autumn chill in Perugia, the 23-year-old Seattle student looked composed but serious as she returned to the same courtroom where she was sentenced to 26 years for murder last December.

She and her former boyfriend, Rafaelle Sollecito, who looked distant when he arrived in court, sat on the same bench where they spent their previous trial, rather than in the cages where convicted murderers are usually held.

It was the first time since the two had seen each other since the December verdict. Lawyers said they exchanged a brief greeting and few words.

They were arrested on Nov. 6, 2007, a few days after Kercher's body was found, stab wounds to her neck and a pool of blood around it, in the apartment she and Knox shared as exchange students in Perugia. Forensic evidence said Kercher was killed the night of Nov. 1.

Knox appeared thinner and gaunt during the brief hearing, in stark contrast to the confident, often smiling image she had projected during most of the first trial. Lawyers say she's worn out by her time in prison.

The defense is seeking a full review of the case, including on disputed DNA evidence that was found on a knife allegedly used in the murder and on the clasp of Kercher's bra. The defense maintains that DNA traces were inconclusive, and also contended they may have been contaminated when analyzed.

COVERAGE OF AMANDA KNOX ON CRIMESIDER