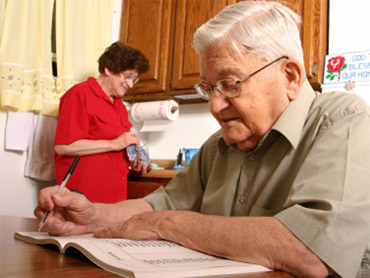 (CBS) Doctors always talk about the importance of daily exercise to stay healthy and ward off disease, but when it comes to fitness, are you doing enough to work out your brain?

A new study suggests you better. The study found people who who kept their brains active most of their lives by reading, writing, completing crossword puzzles, or playing challenging games were a lot less likely to develop brain plaques that are tied to Alzheimer's disease.

For the study, published in the Jan. 23 issue of the Archives of Neurology, researchers compared PET-brain scans of of 65 healthy older people who were an average of 76-years-old, with scans from 10 patients with Alzheimer's and 11 young people who were around 25 years old. The researchers also surveyed the older participants on their lifestyle practices, and how frequently they engaged in cognitively challenging activities since childhood. The researchers were looking for a link between people who "exercised" their minds more and the presence of Beta-amyloid protein, a major component of the amyloid plaque that's a marker of Alzheimer's.

What did they find? Adults who participated in more mind-stimulating activities, especially in their early and middle years, had the least protein Beta-amyloid protein uptake in their brains. The elderly participants with the most puzzles and books under their belt had brains comparable to those of the healthy controls who were fifty years younger.

"Some of the literature has hypothesized this finding, but this is the first study to report that lifetime cognitive activity is directly linked to amyloid deposition in the brain," study author Susan Landau, a research scientist at the Helen Wills Neuroscience Institute at the University of California, Berkeley, told HealthDay. "We think that cognitive activity is probably one of a variety of lifestyle practices - occupational, recreational and social activities - that may be important."

Did physical exercise play any role in the participants' brain health? The researchers found that people who exercised more might be more likely to stimulate their minds over the years, but physical activity had no impact on plaque protein uptake in the brain.

The bottom line? Stimulating your mind starting at an early age might do more to help your brain in the long run rather than picking up chess once you retire. People in the study who recently took up crossword puzzles did not see added benefit.

"What our data suggests is that a whole lifetime of engaging in these activities has a bigger effect than being cognitively active just in older age," Landau told MyHealthNewsDaily.

What to know about Medicare Advantage enrollment
Ryan Jaslow