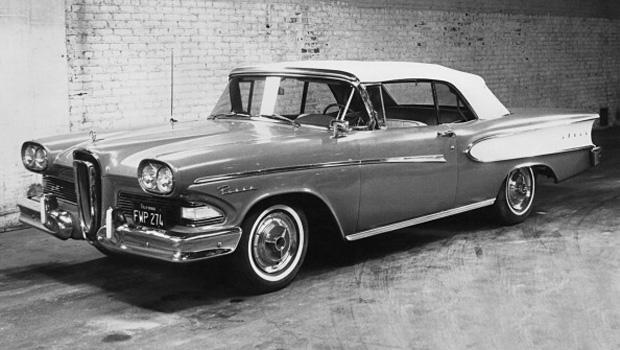 And now a page from our “Sunday Morning” Almanac: September 4th, 1957, 59 years ago today ... the day Americans got their first look at a brand new car.

“This is the Edsel ... Unlike any other car you’ve ever seen!”

Named for Henry Ford’s son, who had died years before at the age of 49, the Edsel was the Ford company’s bid to expand market share.

In its TV commercials, Ford showcased the Edsel’s futuristic features, including its push-button steering wheel.

“With Edsel’s exclusive ‘Teletouch’ drive you can shift and turn the wheel more safely and easily than ever before, because both hands remain on the wheel while the Edsel shifts electrically.”

The Edsel rollout was a huge event, featuring a mountain of print ads and TV commercials, and an all-star television spectacular (here on CBS), called “The Edsel Show”:

All to no avail.

Critics mocked the Edsel’s distinctive vertical grille as a horse collar, or worse.

And owners complained of problems with all those space-age features.

Sales fell drastically short of projections, and in the fall of 1959, Ford shut down the Edsel assembly line.

Although collectors and enthusiasts still keep a few Edsels on the road, for most Americans the Edsel remains synonymous with failure ... failure on something of a cosmic scale.