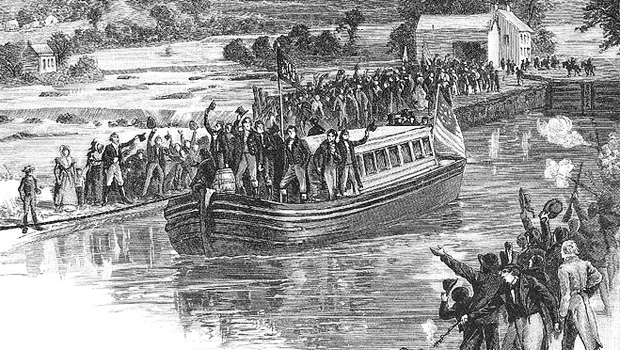 For that was the day Governor DeWitt Clinton poured water from Lake Erie into New York harbor to mark the opening of the Erie Canal.

Eight years in the building, the Erie Canal stretched 363 miles from its namesake Great Lake to the Hudson River near Albany . . . creating a water route from the East Coast to the rapidly-growing Midwest.

A success from the start, the original canal was widened during the mid-1800s . . . and in the 1900s was replaced by an even larger waterway.

By then, the mule-powered barges had been replaced by motorized vessels, prompting the nostalgic 1905 song, "Low Bridge," by Thomas S. Allen, which became the canal's unofficial ballad.

Over time, the canal was eclipsed by its competitors . . . first the railroads, and then the interstates.

As for the original canal, portions of the route still survive, attracting tourists from around the world still eager to navigate the Erie Canal.