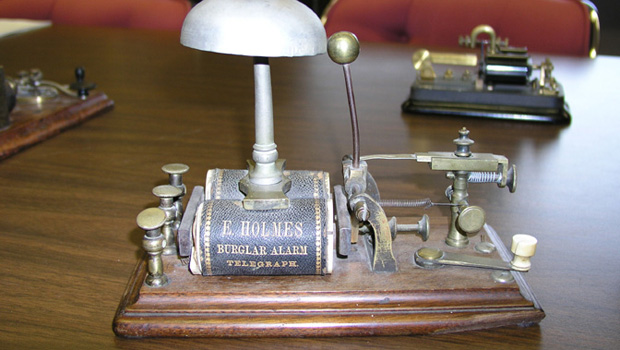 Holmes had bought the patent the year before from inventor Augustus Pope, who'd never done anything with it.

Not so Edwin Holmes! He went into business, first in Boston, then in New York (thought to be a more crime-ridden city).

His advertisements stressed security and peace of mind, while on the technical side, he pioneered the use of telephone lines to connect home and business alarms to ever-alert central offices.

Holmes even set up his own uniformed security service.

Security alarms of all sorts have become ubiquitous since the days of Edwin Holmes -- and they've earned a place in our popular culture.

In the film "How to Steal a Million," Peter O'Toole and Audrey Hepburn used a boomerang to trigger a high-tech art museum alarm, tricking the exasperated guards into turning it off.

Security alarms have come a very long way since Holmes' early model. According to one recent report, they are now a $22 billion business here in the U.S., employing more than 171,000 people.