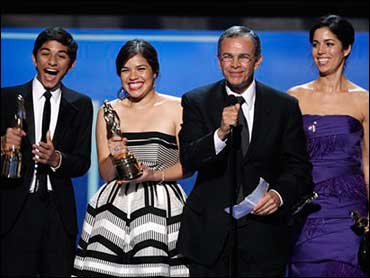 The comedy series won awards for Directing and Best Performance by a Latino-led ensemble cast.

Ferrera, 24, was named Chevy Entertainer of the Year for her on-screen work as Betty Suarez in "Ugly Betty" and her off-screen efforts to encourage young people to get involved in the political process.

Shakira was also recognized for her offstage efforts, receiving the Humanitarian Award for her work in early childhood education.

A host of other music artists, including BeBe Winans, Wynonna Judd and Lucero, performed a tribute to Linda Ronstadt, who received the Trailblazer Award for her contributions to American music.

Designer Narciso Rodriguez was honored for Special Achievement in Fashion.

Zac confessed: "I have never been more excited to present an award in my life" and Ashley added: "I didn't want to mess up."

The Black Eyed Peas, the Cheetah Girls, Sergio Mendes plus Cheech and Chong performed at the ceremony at the Pasadena Civic Auditorium.

Television and film actress Eva Longoria Parker, returned once again as executive producer and host of the telecast.

"Oh God, tonight is so important," noted Longoria. "It's the largest stage Latinos have in Hollywood to be able to recognise the positive portrayals of Latinos in television and music and film. So you'll see a lot of talent here tonight."

The film had the highest-grossing opening ever for a Spanish-language film in the United States in March, playing to both Latino and art-house audiences and took in $12.3 million to make it the country's third-top-grossing Mexican import.

"That's the most important part, the message which is not to separate the family," explained "Under The Moon" star Kate del Castillo.

"That's what unites society. It doesn't matter if you are an immigrant. That's not the point of the movie. What's important is the human part that it shows."

The ceremony will be televised in on Sept. 12 on ABC.