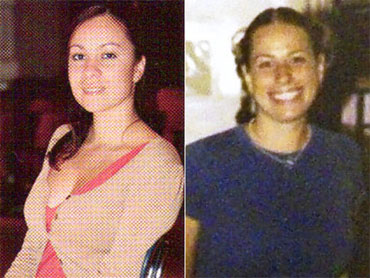 (Facebook Photo)
NEW YORK (CBS) Cindy Mauro and Alini Brito, two New York high school teachers who have been pulled from their classrooms for an alleged nude on-campus romp, have now been joined in the controversy by a third teacher, Allison Musacchio, who is under investigation for being involved with a male student, according to the New York Daily News.

On Thursday, Crimesider asked Marge Feinberg, a spokesperson for the New York City Department of Education, to confirm the investigations of all three teachers.

In regards to Brito and Mauro, Feinberg issued a statement confirming that the school was investigating "an incident of employee misconduct while the school was having an event in the assembly during the evening of Nov. 20."

The tenured teachers "have been reassigned, pending the outcome of the investigation," the statement said, but did not name Brito or Mauro.

In regards to a Crimesider question about Musacchio, Feinberg issued a statement confirming "an allegation against a teacher for employee misconduct" had been made in March 2009. The teacher involved was "reassigned pending the outcome of the investigation," it said, but did not name Musacchio.

CBS affiliate WCBS-TV reported that Mauro, 33, was confronted Dec. 9 by photographers and that she begged them to leave her alone as she got into her car.

Because both Brito and Mauro have tenure they have been temporarily reassigned to what other teachers sarcastically refer to as "the rubber room," which are a series of buildings scattered throughout the city with hundreds of teachers who face a variety of disciplinary charges, according to WCBS-TV.

The recent incident has definitely struck a chord amongst students, many of whom hold Briton and Mauro in high regard.

Jesus Villalba, one of Brito's students, told WCBS-TV, "hearing about the rumor about what's going on – I don't think it's true, because she's a good teacher, and I think someone just started it, and like from there on it got really popular."

It even prompted students to start a Facebook group for fellow students to talk about the incident.

Ironically Musacchio was a member of this group until early Thursday when she apparently deleted her page.