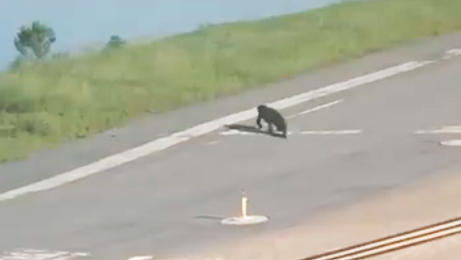 Why did the gator cross the tarmac? To get to the pond on the other side.

An alligator on the tarmac at Orlando International Airport on Monday briefly delayed a Spirit Airlines flight trying to taxi to its gate. Passengers on the plane were shocked to look out their windows and see the gator moseying across the taxiway, Air Live, an aviation news website, reports.

Passenger Anothony Verladi said the plane had just landed from Washington, D.C. when he spotted reptile on the taxiway. He immediately took out his phone and began filming it. The slow-moving gator walked across the asphalt to a small pond.

"Only in Florida..." Verladi wrote in the caption.

The sauntering gator has been viewed over 23,000 times on Facebook and amused some of Verladi's fellow passengers on the plane. It took about five minutes for the gator to get safely out of the way, and the plane had to wait.

About 271 acres of the airport's land is covered in water, but alligator sightings on the tarmac are rare, a spokesperson for Orlando International Airport said, according to Air Live.

The alligator's slow walk to the water did not impact any other flights.