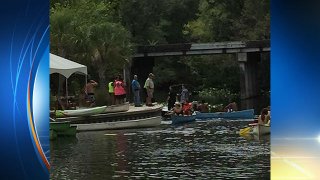 ORLANDO, Fla. -- Authorities have captured and killed an 8-foot, 9-inch alligator that bit off an Orlando woman's arm while she was swimming.

Florida wildlife officials say Rachael D. Lilienthal, 37, was swimming in Wekiva River on Saturday when the gator attacked her, biting her twice. A kayaker struck the alligator with a paddle, causing the animal to release Lilienthal. Two kayakers brought her to the marina where deputies gave her first aid. She was taken to an Orlando-area hospital. Her condition is not known.

Witness Debra Morris told CBS affiliate WKMG that she was swimming in the river when she saw a woman swim past her into a secluded spot in the river.

"She was just swimming. Next thing you know, we heard the people come up and say, 'Get a boat. Call 911 because someone has been bit by a gator,'" Morris said. "Her right arm was bit up to here. It was gone. She had nothing. Like completely gone. (From the) elbow down, (her arm was) gone."