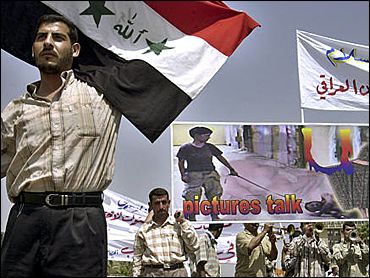 Troops from Poland and other countries in the U.S.-led coalition in Iraq also are accused of abusing prisoners, witnesses told Army investigators.

Witness statements obtained by The Associated Press include other new details about the involvement of U.S. military intelligence soldiers in Iraq, including a civilian interpreter's claim that an Army interrogator forced a prisoner to walk naked through Abu Ghraib.

Such information is likely to become part of the defense of six soldiers charged with beating and sexually humiliating prisoners at Abu Ghraib. The soldiers facing military charges — plus one who has pleaded guilty — are all enlisted military police who worked as guards at the sprawling prison outside Baghdad.

On Friday, U.S. soldiers escorting a convoy of prisoners released from the Abu Ghraib facility briefly exchanged fire with unknown assailants after they stopped in the middle of a highway outside the Iraqi capital.

More than a dozen busses had just left the prison when shots were fired from buildings near the freeway.

Most of the accused soldiers say military and civilian intelligence operatives encouraged them to beat and humiliate Iraqi prisoners to make them more pliable during interrogations. Top Army brass have said they never condoned any abuse.

The records of interviews by Army Criminal Investigation Division agents obtained by The Associated Press include new allegations that coalition forces had beaten prisoners before turning them over to the Americans.

Sgt. Antonio Monserrate, an Army interrogator, told investigators that two detainees had been "injured by the Polish Army." Monserrate referred to the inmates by their prison identification numbers but did not provide any further details.

Polish forces operate in south-central Iraq. Prisoners also accused Iraqi forces of abusing them but named no other country in the documents obtained by the AP.

Other civilian and military workers at Abu Ghraib mentioned claims by prisoners that they had been beaten by "coalition forces" before arriving at the U.S.-run prison.

In Warsaw, Polish Defense Minister Jerzy Szmajdzinski told Polish television on Friday that "this is all some unverified leak" and that it "gives an impression of not being a serious allegation."

He said Poland will ask Washington for explanations.

The command of the Polish-led division in Iraq expressed "indignation" Friday at the abuse allegations.

"I am absolutely sure that Polish troops did not mistreat Iraqi prisoners," Lt. Col. Robert Strzelecki, the division spokesman, told Polish radio.

The prisoner abuse scandal has already hit some U.S. allies. British Prime Minister Tony Blair's government has been criticized for failing to respond to Red Cross reports of abuse, and misstating to Parliament what it knew about those reports. British troops have also been accused of killing civilians.

In Australia, Prime Minister John Howard came under fire this week when news outlets reported that — contrary to his ministers' claims that abuse allegations were only heard recently — an Australian officer received and passed to superiors in October a Red Cross report of abuse.

Civilian translator Bakeer Naseef told an interviewer that one U.S. military interrogator forced a prisoner to walk naked through the prison while saying, "Look at me!" Naseef said he could not remember the interrogator's name.

Lt. Gen. Ricardo Sanchez, the commander of U.S. troops in Iraq, has said he never approved depriving Iraqi detainees of sleep. Sanchez and other officers said interrogators were told that sleep deprivation was among the tactics which required Sanchez' approval.

"It is uncontroverted that military intelligence was in control of the military police," said Harvey J. Volzer, a Washington attorney representing Spc. Megan M. Ambuhl, who has been charged with conspiracy and dereliction of duty — crimes her lawyer maintains she did not commit.

Some soldiers told investigators they complained about abuses but nothing was done. Mary Rose Zapor, a lawyer for accused Pfc. Lynndie England, said that supports the defense argument that there was a climate of tolerance for abuse inside Abu Ghraib.

Zapor said England did not know she could complain, but "it wouldn't have made any difference" if she had complained.

There was no immediate figure for the number of prisoners released on Friday, but the U.S. military said they would set up to 600 people free, reducing the number of those still detained to under 3,000.

Friday's was the third major release from the facility since the scandal broke over the abuse of detainees in late April.

The military periodically frees prisoners from Abu Ghraib, which was also notorious as the site of executions and torture during Saddam Hussein's regime. There are still between 3,000 and 4,000 people believed held there.

Following the revelations of abuse, U.S. officials have said they plan to cut the facility's population in half. But the military is still sending detainees who are considered security risks to the prison.