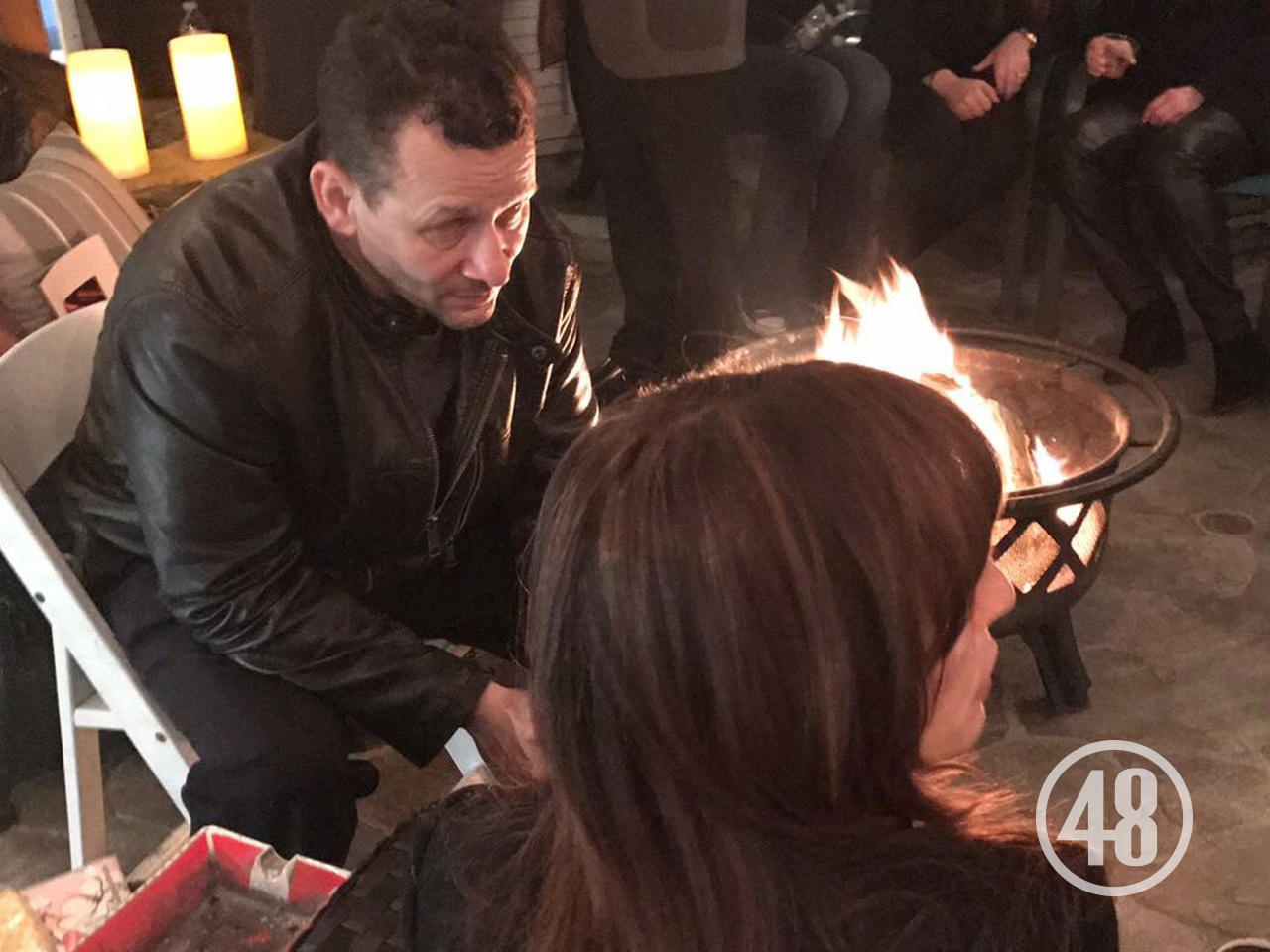 Greg Fisher is a "48 Hours" producer. He investigated the murder of Fabio Sementilli for the episode, "Who killed Fabio?" Watch the episode online.

In these photos taken last February, Monica Sementilli, 46, and Robert Baker, 55, are seen on the patio at a family memorial only days after the murder of Monica's husband, world-famous hairdresser Fabio Sementilli, 49. He had been brutally stabbed to death at his Los Angeles home while smoking a cigar on that same patio.

Relatives and close friends wondered about Baker, an unfamiliar face at the gathering which followed Fabio Sementilli's funeral. He was introduced as a friend of Monica Sementilli's from the gym, who spent time that evening attending to the grieving widow.

"There was already suspicion of this character from friends of the family. And there was a picture taken of him that night. And I believe that picture was sent to the LAPD," explains Luigi Sementilli, Fabio's son from a prior marriage who attended the gathering.

"48 Hours" has learned that a neighbor took these photos surreptitiously and forwarded them to the police, suggesting that Baker might be a possible suspect.  "48 Hours" obtained copies of the photos, which have not been made public previously.

One of the photos clearly shows Baker has a bandage on his left index finger.

"(Baker) had a bandage on his hand. Based on what I heard, that was what raised the suspicion. There was enough suspicion there that someone decided, 'We should take a picture of this guy," Luigi Sementilli told CBS News.

The complaint explains that blood from that cut finger is what cracked the case.  Police say Baker left blood and DNA at the scene of the murder, as well as in Fabio Sementilli's stolen Porsche, which the killers used as a getaway vehicle and discarded in a nearby part of Los Angeles four hours after the murder.

The DNA led directly to Baker, who had a criminal record.

While this secretly-snapped photo may well have been an enticing lead for detectives, LAPD never let on to friends and family, nor the suspects, that Baker was a suspect. Instead, they watched the couple under surveillance while carrying out a ruse aimed at lowering the guard of their suspects.

LAPD detectives allowed the family to think that Fabio Sementilli's murder may have been part of a pernicious Los Angeles crime wave of what are called "knock-knock burglaries."  Skilled thieves target specific homes and literally knock on the door and otherwise check to find a time when nobody is home, then the crooks burglarize the home quickly looking for jewelry and cash.

The knock-knock burglars hit expensive homes which usually have elaborate video surveillance systems so the crooks wear masks and hoodies to cover their identities.

Even the local media reported that Fabio Sementilli might have been murdered by knock-knock burglars. These surveillance photos of two people who police say are Rob Baker and a male accomplice captured them entering the Sementilli home. Hiding their faces in hoodies, they bear an incredible similarity to many of the knock-knock burglars caught on tape.

The LAPD believed early on that the burglary was staged to send them down the wrong investigative trail.  Detectives kept it to themselves, instead the LAPD let the suspects think that investigators had fallen for what police perceived to be a trick.

Meanwhile, police were following Monica Sementilli to Las Vegas where they say she spent a weekend with Baker.

Police claim they learned that Monica Sementilli gave Baker the codes for remote access to her home security system and that each of them monitored it on the day of the murder to facilitate the crime.  Sementilli's lawyers disputed this evidence in court and argued that her association with Baker did not constitute a conspiracy to commit murder.

Fabio Sementilli's family continued to support his wife, unaware that police were methodically building a case against her as the alleged mastermind of the crime.

Fabio and Monica Sementilli had moved to Los Angeles from Toronto, Canada.  Fabio Sementilli had been promoted as an executive for the beauty giant Wella, based in Los Angeles.  The Sementillis had two teenage daughters and lived in a million dollar home with a pool in the toney Woodland Hills neighborhood.

Luigi Sementilli, a masters student in philosophy who still lives in Canada, was entitled to a life insurance policy which his father had taken out for him as part of the divorce settlement from Luigi's mother, Fabio Sementilli's first wife.  Monica asked Luigi to borrow $30,000 from the funds while Fabio Sementilli's life insurance policy was being held up pending the police investigation. Luigi offered to help, but Monica was arrested before the money was transferred.

Mirella Rota is Fabio Sementilli's sister, also a hair dresser who competed alongside her brother at international competitions.  She told CBS News that Monica Sementelli was someone she loved and cherished for two decades.

After the murder, Rota says she remembers trying her best to support Monica when she was disconsolate with her own grief.

Together they attended a private memorial for Fabio Sementilli held at Wella's Los Angeles headquarters.  In honor of her slain husband, Monica sang the Frank Sinatra song "My Way" in front of a crowd of approximately 100 mourners paying their respects.

Days after receiving the award and returning home to Los Angeles, Monica Sementilli and Baker were arrested.

Rota says the family was blind-sided never imagining their sister-in-law could have been involved: "I go to bed scared of nightmares. And I wake up trying to remember anything that could make any sense."

Since June, Monica Sementilli and Baker have remained in custody in Los Angeles awaiting trial.  The felony complaint charges them with murder and murder conspiracy, laying out 56 separate overt acts which DDA Silverman says constitute the murder conspiracy between the alleged lovers.

Blair Berk, the Hollywood celebrity defense attorney who is representing Harvey Weinstein, is one of Monica Sementilli's lawyers.  At a Feb. 27 hearing arguing to have the complaint dismissed against her client, Berk characterized evidence in the case as "poppycock."

"The evidence is as consistent with my client's innocence as with her guilt, and there is no evidence of conspiracy," Berk argued.

Judge Scott Gordon denied the defense motion and sent the case to trial in Judge Ronald Coen's courtroom.  The next hearing is scheduled for March 27 and trial could come by the end of the year.

Both Monica Sementilli and Baker have pleaded not guilty.  Baker's lawyer refused comment.  Sementilli's lawyers have also declined to comment except for one statement that another of her attorneys, Leonard Levine, made after the initial arraignment:

"The only relevant question is whether my client had anything to do with the death of her husband and that she adamantly denies."

Police say the second man in that surveillance video, whom they identify as an accomplice of Baker's, has not been identified.  Police are still investigating and searching for leads as to his identity.