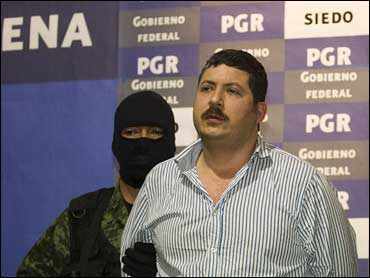 Soldiers captured one of Mexico's most-wanted drug smugglers, whose nickname "la burra" - female donkey - belies his power as the alleged trafficker controlling drugs flowing through the northern city of Monterrey.

Authorities announced the arrest of Hector Huerta Rios on Wednesday, just hours before U.S. Secretary of State Hillary Clinton arrives for a two-day visit to discuss security issues and U.S. support for Mexico's battle against the drug cartels. Clinton is scheduled to travel to Monterrey on Thursday.

Clinton said Wednesday the Obama administration acknowledges that the United States shares responsibility with Mexico for dealing with the violence. She said the administration will work with Mexican authorities to improve security on both sides of the border.

She made the comments to reporters while traveling to Mexico City, where she will discuss steps the administration is taking on the U.S. side. Mexican officials have in the past complained that the U.S. has not done enough on its part to stem the violence blamed on Mexican drug cartels.

Huerta Rios was detained Tuesday in a suburb of Monterrey, said Army Gen. Luis Arturo Oliver. He was one of 37 top drug suspects on a most-wanted list published Monday.

Officials said Huerta Rios acted as a lieutenant for the Beltran Leyva cartel in Monterrey, an industrial hub and Mexico's third-largest city. They say he directed the cartel's operations there, and even met with the rival Gulf cartel to divide up the territory.

"We have information that as the representative of the Beltran Leyva cartel he held meetings with members of the Gulf cartel with the aim of agreeing on drug distribution zones, in order to avoid clashes between the rival gangs," said Marisela Morales, the federal deputy attorney general for organized crime.

The capture occurred just two days after the government published a list of rewards for information leading to the capture of 24 top drug lords and 13 of their lieutenants.

Authorities had offered rewards of up to $2 million for the drug lords and up to $1 million for the lieutenants, including Huerta Rios. It was not clear if a reward was paid in this case.

Huerta was nicknamed "La Burra," or female donkey. "Burro," or male donkey, is a common slang word for someone who transports drugs, but it was unclear if that was the reason for the nickname. Four men identified as his bodyguards were detained along with him, and soldiers also seized three assault rifles and four grenades from the suspects.

Huerta was arrested on an outstanding homicide warrant; the other four suspects were being held pending charges.