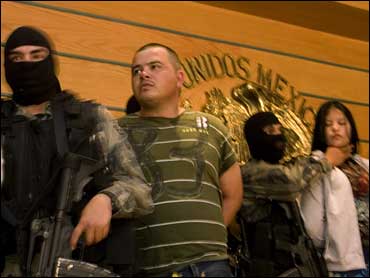 Mexico's government on Monday offered $2 million each for information leading to the arrest of 24 top drug lords in a public challenge to the cartels' violent grip on the country.

The list indicated that drug gangs have splintered into six main cartels under pressure from the U.S. and Mexican governments. The two most powerful gangs — the Sinaloa and Gulf cartels — each suffered fractures that have given rise to new cartels, according to the list published by the Attorney General's Office.

The list offers 30 million pesos ($2 million) in rewards for 24 top members of the cartels and 15 million pesos ($1 million) for 13 of their lieutenants. Arrest warrants have been issued for all 37 people on the list, the Attorney General's Office said.

Mexico's drug violence has killed more than 8,000 people in the past two years as gangs battle each other for territory and fight off a government crackdown. Some of that violence is spilling over into the United States, especially the Southwest, where kidnaps and killings are on the rise.

While Mexico has offered rewards for drug lords in the past, it has usually been done on an individual basis. The new list appears to be the first offering rewards for all the most wanted cartel members at once.

Some of the men, such as Joaquin Guzman and Ismael Zamabada, are also targeted by separate $5 million reward offers from the U.S. government.

The document offered insight into the reorganization of the cartels two years into President Felipe Calderon's military crackdown against them.

A gang led by Beltran Leyva brothers — once affiliated with the Sinaloa group under the Pacific cartel alliance — was listed as its own cartel. So was La Familia, which operates in central Mexico and was once considered a gang that answered to the Gulf cartel.

Calderon's government has attributed fractures in the cartels to the military crackdown, saying the arrest of drug kingpins have set off internal battles for control that have led to Mexico's sharp surge in violence. It dismisses suggestions by some U.S. officials that Mexico is losing control of some of its territory.

The list comes days before a visit from U.S. Secretary of State Hillary Clinton and a month before President Barack Obama visits.

On Friday, the Mexican army arrested an alleged drug trafficker suspected of organizing an attack on a U.S. consulate as well as the killing of several soldiers in retaliation for a government crackdown.

Najera Talamantes is suspected in an Oct. 12 attack in which one man opened fire on the U.S. consulate in the northern city of Monterrey and another man threw a grenade that failed to explode. Nobody was hurt.