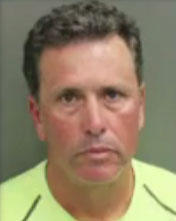 ORLANDO – One of the suspected “Cocaine Cowboys” – on the run for more than a quarter of a century – has been arrested in Kissimmee, Florida, reports CBS Miami.

Federal authorities originally accused the Falcon-Magluta organization of smuggling 75 tons of cocaine, worth more than $2 billion, into the United States between 1978 and 1991.

Willy Falcon and Magluta were convicted in what was at the time Miami’s biggest drug smuggling case, and are both currently in federal prison.

Gustavo Falcon, nicknamed “Tabby,” had been a fugitive ever since.

He had been rumored to be living in Cuba, but was arrested Wednesday afternoon in a joint operation involving U.S. Marshals from Miami and Orlando.

A source told CBS Miami that Falcon had just returned from a bicycle ride with his wife when he was taken into custody – hence the shirt in his mugshot. He had been living there with his wife and their children, using fake identities, the source says.