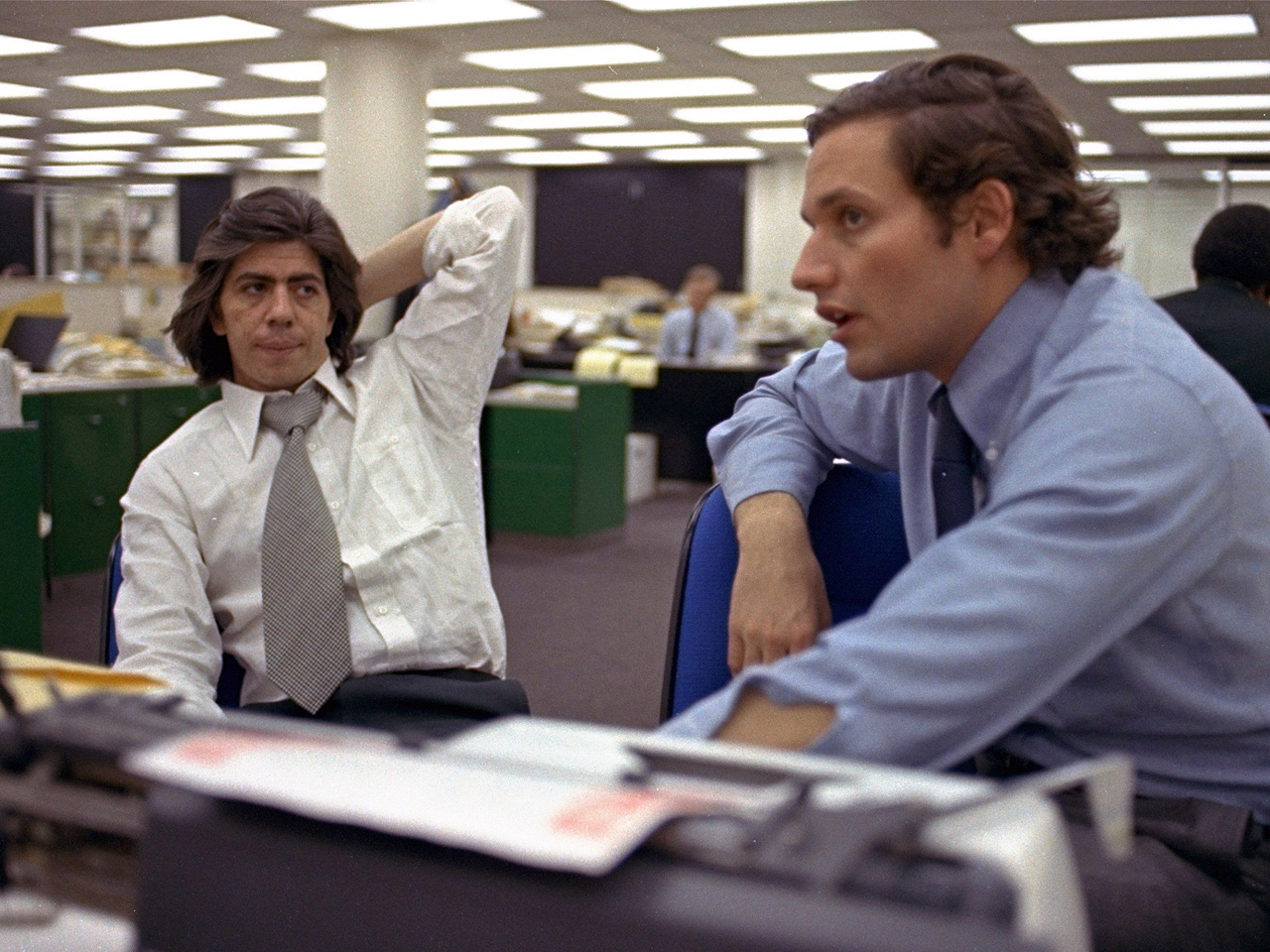 "All the President's Men" is a book, and a movie, about Watergate -- the scandal that made two Washington Post reporters, Bob Woodward and Carl Bernstein, legends of journalism. Now, four decades after the book's publication -- and with the 42nd anniversary of the break-in coming up on Tuesday -- David Martin has spoken with both halves of "Woodstein" (as the two have come to be known) for our Cover Story:

Bob Woodward had been working at the Washington Post for only nine months.

"It starts the morning of the burglary," he told Martin. "They called me in. I think the editors who were in looked around and said, 'Who would be foolish enough to come in on Saturday?' and they knew I would come in.'"

That call set in motion the most incredible sequence of events in American political history.

Steve Mielke, curator of the Woodward and Bernstein Archives at the University of Texas, showed Martin Woodward's notes from the arraignment of the burglars the morning they were arrested. The first note he took, "Five men arrested - at Democratic National Headquarters with sophisticated photo equipment." All of the raw material they used to unravel the Watergate conspiracy is here.

"I'm sitting in the front row," Woodward recalled. "And the judge asked where the lead burglar, James McCord, had worked. And McCord went [mumbling], and the judge said, 'Speak up.' And McCord went, 'CIA.' And he said, 'SPEAK UP!' and McCord finally said, 'CIA.'"

This is the moment Watergate takes off.

Carl Bernstein, a street-savvy reporter who had worked in newspapers since he was 16, horned in on the story to create the perfect journalistic odd couple.

"Here we got the Yalie and the college dropout, the Republican and the radical," said Martin. "Did you guys even like each other?"

"Not particularly," Bernstein said. But he knew a good reporter when he saw one: "He did the work, and so whatever the other part of it was, he knew how to get a story."

Martin examined the list of all the people Woodward phoned in those early days after the break-in. "The moral of those two pages is talk to everyone," said Martin. "You push on every door."

Within 12 weeks, they had pushed the story far beyond the five burglars to one of President Nixon's closest confidants. A faded carbon copy of the first draft as it was banged out on a manual typewriter read:

"John M. Mitchell, while serving as U.S. Attorney General, personally controlled a secret Republican fund that was used to gather information about the Democrats, The Washington Post has learned."

They took it to the Post's executive editor, Benjamin Bradlee. Bernstein recalled Bradlee's response: "You know, there's never been a story like this. You're going to call the Attorney General of the United States a crook."

"Carl had called John Mitchell before we ran the story," said Woodward," and [Mitchell] threatened Katherine Graham," the owner and publisher of the Washington Post.

Bernstein continued: "He kept saying, 'Jesus' as I read to him what the story said. And then, he said, 'All that crap, you're putting it in the paper, if you print that, Katie Graham is going to get her tit caught in a big, fat ringer. And when this campaign is over, we're gonna do a little story on you two boys.' And he hung up the phone -- and you could tell the stakes."

"The stakes were, you were either writing history or you were writing your own professional obituaries," said Martin.

"Exactly," said Woodward. "And we were confident in the method and the sources, but not absolutely sure, so we're living on a form of thin ice."

A new paperback edition, published by CBS' Simon & Schuster, calls it "the most devastating political detective story of the century."

But this is not a who-done-it (because we know who done it); this is a how-done-it. It's a reporter's procedural.

"That's right -- it is about reporting," said Bernstein. "It's all about the unglamorous 'How do you go about reporting a story.' We went out at night and knocked on doors."

One door they knocked was that of Hugh Sloan, the former treasurer of the Nixon re-election campaign.

"You say in the book that every time you visited Sloan you felt like vultures -- why?" asked Martin.

"One, his wife was pregnant and about to deliver a child, and we were hanging outside," said Bernstein. "We were like buzzards."

"You could tell his conscience was troubled," said Woodward, "and so he would answer questions and never throw us out. And his wife, Debbie said something that we'll never forget. She said, 'This is an honest house.' And that's, as a reporter, that's what you're looking for."

Students come to the University of Texas looking for the chance to lay hands on Woodward and Bernstein's first rough notes of history.

Curator Steve Mielke said, "Their eyes will light up and they think they've had some kind of moving experience just being able to touch the same papers that Woodward and Bernstein touched" -- the Holy Grail of Journalism.

Like Woodward's notes from his clandestine meetings with the most famous source in the history of journalism. He is simply "X" or "my friend." In the book he became forever known as "Deep Throat."

"They would talk, then he would go home, type up the notes so he'd have them to share the next day at the Post," said Mielke.

X's first comment in the notes: "There is a way to untie the Watergate knot."

With Deep Throat's guidance, they reported that the Watergate burglary was part of a much larger campaign of political espionage and sabotage against Nixon's political opponents.

Bernstein said, "That story finally got the attention of the rest of the press, particularly CBS News and Walter Cronkite.

"The effect of Walter Cronkite and CBS running those stories said to the country, said to those in the journalism profession, 'This story is huge and we give credence to what the Washington Post is doing.'"

They weren't out there on their lonesome anymore? "That's right."

But two weeks after their biggest story came their biggest mistake: They incorrectly reported that Hugh Sloan had told a grand jury White House chief of staff H.R. Haldeman controlled the fund which paid for all that espionage and sabotage. Sloan's attorney went on television and categorically denied that his client had implicated Haldeman at all.

"That must be the moment when you throw up," said Martin.

"Worse," Bernstein laughed. "No, we thought we might have to quit."

How many sources did they have for that story? "We had two or three and we had some logic," said Woodward, "and, of course, logic isn't a source. And that's one of the lessons that we learned. It was, it was painful."

So painful that they ratted out an FBI agent they thought had lied to them about Haldeman. They went to his boss.

"It was the worst of journalism," said Woodward. "Look, we'd accused the number one aide to the President of the United States and the attribution was wrong. We were desperate young men."

"So you deliberately blew a source," said Martin. "What's the ethics of that?"

And then there is Deep Throat.

"Part of your ground rules with him were not just never to quote him, but never to acknowledge his existence," said Martin. "And you did that in 'All the President's Men.'"

"Indeed. We felt we had to lay it all out, to tell the truth," Woodward said.

Deep Throat's role in the Watergate investigation caused a sensation. Everyone wanted to know who he was.

Mark Felt, the number two man at the FBI, was Deep Throat -- but he had been put into the position of having to lie repeatedly in public to deny that he was in fact Deep Throat.

"I had to be aggressive with him,' said Woodward. "We had to tell the complete story."

In the film version of "All the President's Men," Deep Throat (played by Hal Holbrook) meets with Woodward (Robert Redford) in the dead of night in an underground garage. "The coverup had little to do with Watergate," he told Woodward. " It was mainly to protect the covert operations. It leads everywhere. Get out your notebook -- there's more."

Never has reporting looked so thrilling.

Woodward calls it the Golden Age of journalism.

Martin asked, "Are we still in the Golden Age?"

Both Woodward and Bernstein replied, "No."

"Not even close," added Woodward. "The whole culture has changed. The Internet age -- everything is driven by impatience and speed. And what does that mean? We don't have that time to really dig into stories."

The movie, with its rotary dial and pay phones, seems like an age gone by . . . except for one thing:

"Except for the way you do the work," said Bernstein. "If you're going to get the story, you still do it the same way."


WEB EXTRA: Read an excerpt from the 2014 edition of "All the President's Men" by Carl Bernstein and Bob Woodward (pdf)