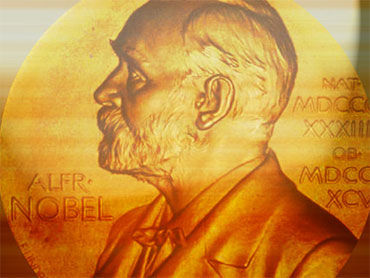 Scientists who developed a cornerstone in thinking behind quantum mechanics, the broad sweep of chaos theory or the expanding nature of the universe and dark energy could be rewarded for years of effort and research when the 2009 Nobel Prize in physics is announced Tuesday.

Who may win, and for what, is a guessing game at best. The Nobel Foundation does not proffer names of possible candidates or hints of any kind. That, along with the complexity of the science involved for an award encompassing a wide latitude of subjects, makes it difficult to say with any authority who could win.

Speculation is swirling around work by Israel's Yakir Aharonov and Britain's Michael V. Berry for work done on the Aharonov-Bohm Effect and the related Berry Phase.

The theory developed in 1959 by Aharonov with the late David Bohm, explains some of the obscure and weird actions of parts of atoms around a magnetic field "somehow allowing an electron effectively to split around the magnetic field and rejoin later," said Phil Schewe of the American Institute of Physics. "Experiments in this area helped vindicate current thinking in quantum mechanics that goes back nearly a century."

There is also sentiment gaining that Juan Ignacio Circ, directory of theory division at Germany's Max Planck Institute for Quantum Optics, could share the prize with Peter Zoller of the Institute for Theoretical Physics at the University of Innsbruck for their research into quantum optics and quantum computing.

Similarly, John B. Pendry of Britain, Sheldon Schultz at the University of California, San Diego, and David R. Smith at Duke University could be tapped for what Thomson Reuters Scientific called their prediction and discovery of negative refraction.

Karin Bojs, science editor of the Stockholm daily newspaper Dagens Nyheter, who has stood out as a leading Nobel guesser over the years and correctly picked the winners of this year's medicine prize, guessed that Frenchman Serge Haroch would get the physics prize for research in quantum mechanics.

She also mentioned Aharonov and Berry as possible winners.

Another Frenchman, Alain Aspect, was also a possible contender, she said.

"He was the first to prove in practice that the paradox that Einstein didn't believe in, that particles in a seemingly mysterious way can communicate with each other at great distances," she said.

One of the biggest about-faces in physics took place in 1998, when what Albert Einstein called his greatest blunder was proven to be correct and that the universe's expansion is accelerating. Einstein came up with the idea of a "cosmological constant" to counter the force of gravity in the universe to keep it static, but Edwin Hubble found the universe to be expanding and Einstein's fudge factor was abandoned.

The University of California, Berkeley's Saul Perlmutter, Brian Schmidt of Australia and Adam Reiss at Johns Hopkins University found the universe's expansion to be accelerating based on a study of supernovas and came up with the theory of "dark energy" to explain it.

Dark energy may account for 70 percent of the universe. The trio won the prestigious Shaw prize in astronomy three years ago.

Schewe said the Institute could take a broader approach with the award this year, looking to chaos theory and its advancement by several researchers, including Mitchell Feigenbaum at Rockefeller University in New York, Edward Ott and James A. Yorke at the University of Maryland and Celso Grebogi at the University of Aberdeen.

Alfred Nobel, the Swede who invented dynamite, established the prizes in his will in the categories of medicine, physics, chemistry, literature and peace. The economics prize is technically not a Nobel but a 1968 creation of Sweden's central bank.

The awards include a 10 million kronor ($1.4 million) purse, a diploma and an invitation to the prize ceremonies in Stockholm and Oslo on Dec. 10, the anniversary of Nobel's death in 1896.

On Monday, three American scientists shared the Nobel Prize in medicine for discovering a key mechanism in the genetic operations of cells, an insight that has inspired new lines of research into cancer.

Elizabeth H. Blackburn, who also has Australian citizenship, Carol W. Greider and Jack W. Szostak were cited for their work in solving the mystery of how chromosomes, the rod-like structures that carry DNA, protect themselves from degrading when cells divide.

Recent winners of the Nobel Prize in physics:

- 2007: France's Albert Fert and Germany's Peter Gruenberg for work on the discovery of giant magnetoresistance.

- 2006: Americans John C. Mather and George F. Smoot for work examining the infancy of the universe, aiding the understanding of galaxies and stars and increasing support for the Big Bang theory of the beginning of the universe.

- 2005: Americans John L. Hall and Roy J. Glauber and German Theodor W. Haensch, for research explaining the behavior of light particles and determining the frequency of light with great precision.

- 2004: Americans David J. Gross, H. David Politzer and Frank Wilczeck, for their work in the discovery and exploration of strong force and quarks.

- 2002: Raymond Davis, Jr., United States, and Masatoshi Koshiba, Japan, for their research into cosmic neutrinos; and Riccardo Giacconi, United States, for pioneering contributions to astrophysics that led to the discovery of cosmic X-ray sources.

- 2001: Eric A. Cornell and Carl E. Wieman, United States, and U.S.-based researcher Wolfgang Ketterle of Germany for creating a new state of matter, an ultra-cold gas known as Bose-Einstein condensate.

- 1999: Gerardus 't Hooft and Martinus J.G. Veltman, Netherlands, for their theoretical work on the structure and motion of subatomic particles.