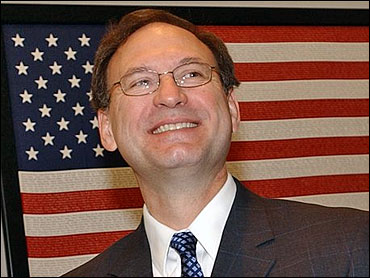 Sen. Joseph Lieberman, a Democrat, said Alito told him the 1973 Roe v. Wade decision establishing abortion rights "was precedent on which people, a lot of people, relied, and had been precedent now for decades and therefore deserved great respect."

Lieberman called that "encouraging," but also said the federal judge had not assured him that he would not overturn Roe.

Abortion will be a key question Alito will face at his Supreme Court confirmation hearings in January.

President Bush has nominated him to replace retiring Supreme Court Justice Sandra Day O'Connor, who has been a key vote on areas like abortion restrictions, the death penalty, campaign finance, affirmative action and states' rights.

As an appeals court judge, Alito held that states can require women seeking abortions to notify their spouses. The Supreme Court disagreed.

Sen. Susan Collins, a Republican, also asked about abortion in a later meeting with Alito.

"I asked him whether it made a difference to him if he disagreed with the initial decision, but it had been reaffirmed several times since then. I was obviously referring to Roe in that question," she said after meeting Alito.

"He assured me that he has tremendous respect for precedent and that his approach is to not overturn cases due to a disagreement with how they were originally decided," she said.

The White House has yet to officially nominate Alito as O'Connor's replacement, but he already has met more than two dozen senators in preparation for his confirmation hearings.