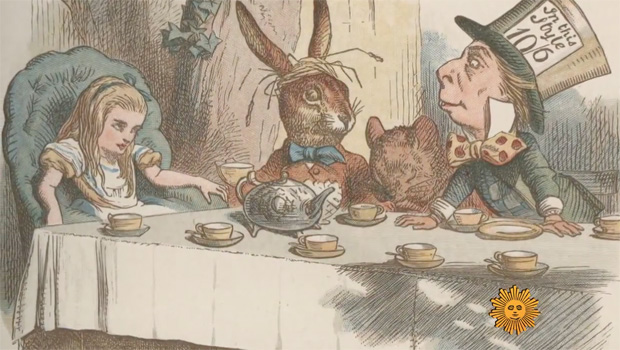 For generations, "Alice's Adventures in Wonderland" has transported us down the rabbit hole into the whimsical underworld of the Cheshire Cat with his grin; the Mad Hatter with his silly riddles; and the Monarch head who oft demanded "Off with their heads!"

"At some point in your life you identify with Alice," said Andrew Sellon, a member of the Lewis Carroll Society. "Because you look around and say to yourself, 'Everyone around here is crazy and how am I going to get out of this experience alive?'"

Sellon was visiting the New York Public Library, one of many institutions worldwide celebrating the beloved story's 150th anniversary, and the movies, theater and music it has inspired.

"What other popular cultural book that you can think of that has done this?" Sellon said. "There isn't. You've got Shakespeare, you've got the Bible, and you've got the Alice books. That's a pretty small list that has had that wide a reach."

The story is filled with complex characters, riddles and rhymes, but it all began with a simple boat ride in Oxford, England. On a July 4th afternoon, mathematician Charles Dodgson (writing under the pen name Lewis Carroll) first spun the tale to entertain three little girls, one named Alice Liddell.

"She demanded that he write it down for her," said Judith Guston, a curator at Philadelphia's Rosenbach Library, home to another Alice-themed exhibit. "And this is what created the story that we know today."

So why is "Alice" so popular? "I think that many people are referring to it almost without even knowing," said Guston. "Everyone's saying that this has 'gone down the rabbit hole,' And everything's become 'curiouser and curiouser,' all the time. It's a terrifically quotable book."

Plus, it's never too late to take a trip down the rabbit hole.

"A lot of people return to it in their adulthood and are able to look back on their childhoods that way," said Guston.


"You can read it as a child and look at the book completely differently when you read it as an adult," Johnson said.

"For sure. It's one of those things that just has so many messages in it -- both for kids and adults, that you'd want to go back and read it again."

Proof that 150 years later, the adventure isn't over yet.