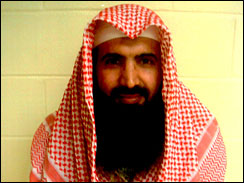 Alleged al Qaeda sleeper agent Ali al-Marri appeared in a U.S. court Tuesday to face terror charges for the first time after being held for more than five years as an enemy combatant.

Al-Marri is charged with providing material support to terror and conspiracy and is expected to be sent to Illinois to enter a plea. On Tuesday, he answered affirmatively when a federal magistrate asked the 43-year-old Qatar native whether he understood the counts against him.

Part of the appearance's significance is that "he's there in court as a criminal defendant, and not still in the brig as an enemy combatant, due to legal and political forces years in the making," says CBS News legal analyst Andrew Cohen.

First, al-Marri is to appear again in Charleston federal court on March 18 for a detention hearing where a judge will decide whether he can be released on bail. Until his transfer, prosecutors and defense attorneys agreed to keep al-Marri in a civilian cell at the Navy brig where he's been held since 2003 so that he has more access to his lawyers.

Wearing a gray, hooded sweat shirt, gray sweat pants, a long black beard flecked with gray and a close-fitting cap, al-Marri entered the courtroom for the 10-minute hearing and shared a quiet laugh with his attorney. He smiled and glanced around the courtroom as lawyer Andy Savage appeared to point out the different courtroom officials.

Al-Marri answered "Yes, sir" when asked whether he understood the charges and whether Savage was his attorney.

"Al-Marri faces a very scaled down terror cast," says Cohen. "He's charged with supporting Al Qaeda and conspiring to support Al Qaeda, two federal charges that have been used with great success by prosecutors both before and after the terror attacks of 9/11."

Al-Marri was studying at Bradley University in Peoria, Ill., when he was arrested in late 2001 as part of the investigation of the Sept. 11 attacks. He was initially indicted on fraud charges, which were dropped in 2003 when President George W. Bush declared him an enemy combatant.

The government has said al-Marri met with Osama bin Laden and volunteered for a suicide mission or whatever help al Qaeda wanted. He arrived in the U.S. the day before terrorists struck the World Trade Center and the Pentagon.

Al Qaeda leaders wanted al-Marri, a computer specialist, to wreak havoc on the U.S. banking system and to serve as a liaison for other al Qaeda operatives, according to a court document filed by Jeffrey Rapp, a senior member of the Defense Intelligence Agency.

The U.S. Supreme Court forced President Barack Obama to act in al-Marri's case when it decided in December - after the election, but before the transfer of power - to hear his challenge to being held as an enemy combatant. Several justices had indicated as early as 2006, in the detention case of U.S. citizen and former Chicago gang member Jose Padilla, that they were troubled by the Bush policy of holding people without charges on U.S. soil.

Since the terrorist attacks of Sept. 11, 2001, the government has held two U.S. citizens - Louisiana native Yaser Hamdi was the other - and one legal resident, al-Marri, as enemy combatants. Hamdi was released in 2004 after the government said he no longer posed a threat to the United States and no longer had any intelligence value.

Meanwhile, five men charged with the Sept. 11 attacks say they "are terrorists to the bone" in their most detailed response to U.S. war crimes charges.

The five Guantanamo prisoners seek to justify the attack that killed nearly 3,000 people.

The Associated Press on Tuesday obtained the six-page court filing in which the defendants refer to Sept. 11 as "the great attack on America."

The five include self-proclaimed mastermind Khalid Sheik Mohammed. He has acknowledged responsibility in the past.

President Barack Obama suspended their trial in January as his administration evaluates the war crimes trials.