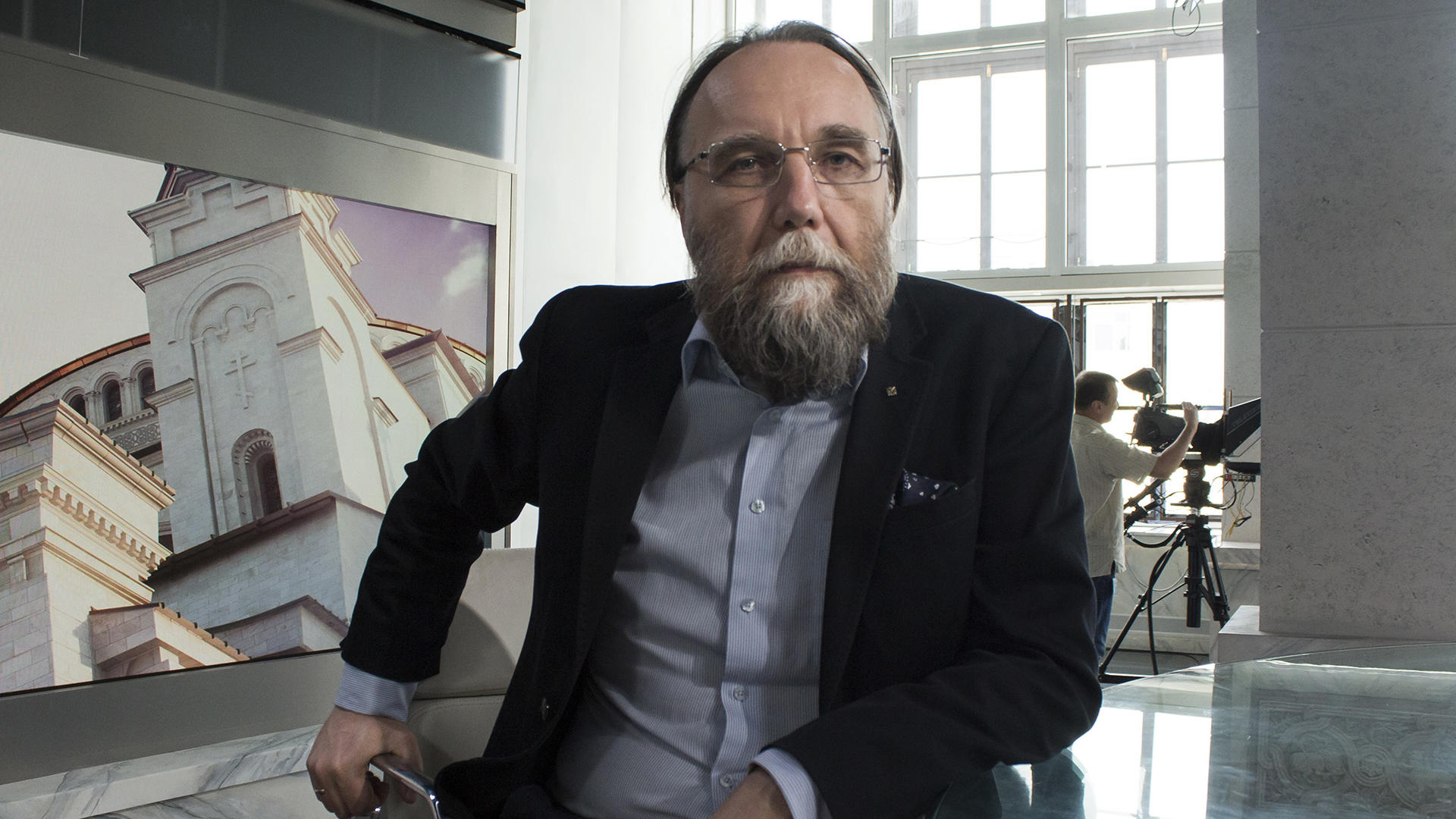 In the days leading up to Russia's February invasion of Ukraine, Vladimir Putin gave a televised address that rejected the idea of Ukraine as an independent country. It never had the "stable traditions of real statehood," Putin said. Instead, modern Ukraine was "entirely created by Russia or, to be more precise, by Bolshevik, Communist Russia."

More than prelude and pretext for a bloody war, Putin's words echo the writings of a man who has proselytized this idea for almost three decades: Aleksandr Dugin. A Russian political philosopher, Dugin has been influential with Russian military and political elites — even with Putin himself.

Called "Putin's brain" by some political analysts, Dugin has taught at Russia's leading university, planned courses for Russian military institutions, and appeared on Russia's top television channels. Because of his perceived proximity to the Kremlin, the U.S. government sanctioned him in 2015, following Russia's annexation of Crimea the previous year.

Foreign policy analysts have since looked to Dugin for a more fulsome understanding of Putin's goal in Ukraine. Specifically, they turn to Dugin's magnum opus, a 1997 book called The Foundations of Geopolitics: The Geopolitical Future of Russia.

Published a quarter-century ago, Dugin's book prescribes that for Russia to rebuild its power globally, it would need to use disinformation, destabilization — and annexation. One of the targets for Russian annexation, he wrote, should be Ukraine. In Dugin's mind, an independent Ukraine stands in the way of Russia becoming a transcontinental superpower.

"Ukraine as a state has no geopolitical meaning," Dugin wrote in his treatise. "It has no particular cultural import or universal significance, no geographic uniqueness, no ethnic exclusiveness."

In 2017, 60 Minutes correspondent Lesley Stahl interviewed Dugin in Moscow as part of a story she reported about Russia's disinformation campaign and the 2016 presidential elections. The interview did not make the broadcast.

During the conversation, Stahl asked Dugin to explain his 1997 book.

"I always believed, and I believe, in the future of greatness of Russia because Russia was always and tried to be a superpower," Dugin said in 2017. He told Stahl his goal is not unipolarity, with Russia becoming an unchallenged superpower. Instead, he looks to return Russia to superpower status as one among several countries leading the world order.

To do this, Dugin said, would require more than military strength.

"We need a kind of spiritual sovereignty," he said. "We need to be free and liberated, not only physically as a state, as a people, but as well [a] revival of Russian logos, of Russian spirit, of Russian identity that is much more important."

This Russian identity is a key component of the nationalist ideology called Eurasianism, which Dugin laid out in "The Foundations of Geopolitics." The idea suggests that Russia, uniquely positioned between Europe and Asia, is unassimilable within Western civilization. Instead, Dugin thinks Russia should embrace its geopolitical distinctiveness and dominate both spheres, uniting Europe and Asia into one great empire ruled by ethnic Russians. Dugin has set Eurasianism in direct opposition to liberalism and the whole "Atlantic" world he believes is led by the United States.

Russia analysts have found it to be a philosophy Putin has embraced since taking office. In November 2000, six months into his term as Russian president, Putin publicly declared, "Russia has always perceived of itself as a Eurasian country," according to John B. Dunlop, an expert on Soviet and Russia politics.

How, then, does Ukraine factor into Russia's imperialist dream? It is an obstacle, according to Dugin.

"Ukraine as an independent state with certain territorial ambitions represents an enormous danger for all of Eurasia and, without resolving the Ukrainian problem, it is, in general, senseless to speak about continental politics," Dugin wrote in his 1997 book.

Moreover, according to Russian history professor Jane Burbank's translation, Dugin sees total control of the whole north coast of the Black Sea as an "absolute imperative" for Russian geopolitics and thinks Ukraine must become "a purely administrative sector of the Russian centralized state" for Russia's goals to be realized.

Putin clearly agrees. In an article he wrote last year, he declared that "Russians and Ukrainians were one people" who share "the same historical and spiritual space." He claimed their shared "Ancient Rus" lineage challenges the legitimacy of Ukraine's relatively recent borders. During his address ahead of February's invasion, Putin called Ukraine a "colony with a puppet regime."

Since Russia's war in Ukraine began, Dugin has remained steadfast that subsuming Ukraine is the only path forward for Russia. Last month, he posted a video to Telegram, a messaging service that has become the dominant social networking app in Russia, in which he explained why Russia invaded its neighbor. "Without Ukraine, Russia cannot become once more the empire," Dugin said in the video. "With Ukraine inside of Russia zone of control, it will become empire once more."

In her 2017 interview with Dugin, Stahl pointed out to him that Putin seems to have listened to all his recommendations. Not only had Dugin called for Russia to annex Ukraine, which Russia first did in Crimea in 2014, but Dugin had also suggested that Russia make Iran an ally and encourage Britain to leave the European Union.

Dugin rebuffed the suggestion that Putin is following his blueprint. He pointed out that his policy prescriptions were decades old, and that Putin was only just now fulfilling the first steps.

"We demand from him to be much more authoritarian than he is," Dugin told Stahl. "So he a little bit disappoints us because it [takes] too long."