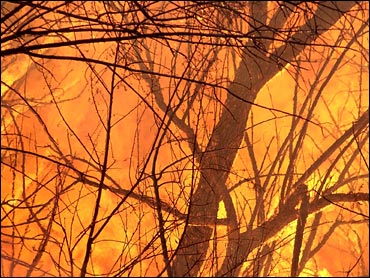 Firefighters on Thursday contained a suspected arson fire that charred about 800 forested acres along the Rio Grande and forced people to evacuate dozens of homes near the heart of Albuquerque.

Helicopters were still dropping water on smoldering trees and brush in the area Thursday, but some evacuees were being let back into their homes.

"It's really banked down. We're not getting the big flare-ups like last night," she said. "They will probably do the drops until they are under control, and then we can go in there and search for the hot spots."

Mayor Martin Chavez said evidence suggests the wind-driven blaze was not merely a flare-up of a fire that broke out a day earlier about a mile to the south.

"We know that there was more than one point of origin, at least two points of origin, which strongly suggests arson," Chavez said on CBS News' Early Show. Authorities were seeking an adult who might have set the blaze, he said Thursday.

As the fire spread Wednesday night, every Albuquerque firefighter was called to duty to battle the blaze. About 200 were at the scene Thursday.

Gov. Bill Richardson said Thursday that he worried about two elements: "wind that could re-ignite the fire or some crazy person that wants to make a name for himself."

Hoping to prevent more fires, the governor ordered a 19-mile stretch of the heavily wooded Rio Grande bosque closed to the public through July 4.

Reule said firefighters would enter the burned area and deal with hot spots once the two National Guard helicopters gained the upper hand on the areas still burning.

Smoke from the wildfire could be seen across Albuquerque, a sprawling city of about 450,000, and ash drifted down in some areas.

"It's been a horrific fire for us," said Chavez. "This river snakes its way right through the heart of Albuquerque."

No injuries were reported and no structures were damaged, but dozens of homes in an exclusive area and several other subdivisions and apartment complexes were evacuated. Chavez said more than 100 homes were "very severely compromised" and 200 to 250 people were ordered to evacuate.

Richardson said he had asked the Federal Emergency Management Agency to send a federal team to manage the fire and remain in the area through the Fourth of July holiday.

Jo Chestnut had packed up family belongings and headed for a shelter while her husband stayed behind to move out their thoroughbred horse as the fire burned near their home.

"It is very overwhelming; the thought that someone may have started this on purpose is just frightening that there is that kind of evil," Chestnut said.

The fire Tuesday — which burned about 700 acres — apparently was caused by fireworks, Chavez said. A house under construction was destroyed and another home was damaged.

Meanwhile, crews in Tucson, Ariz., were digging breaks on the crucial northern and southern fronts of a wildfire that destroyed about 345 buildings last week in a mountaintop vacation hamlet.

For the first day in nearly a week, Mother Nature was kind to those trying to stop the advance of the Aspen fire Wednesday, reports CBS News Correspondent Stephan Kaufman: No heavy winds.

"This was the first time since this team arrived that we did not have red-flag warnings," said fire spokeswoman Carrie Templin. "We were able to get crews in there safely. We didn't have to worry about winds causing them to have to be pulled out."

The blaze has charred 30,200 acres, much of it pine forest, but is now 35 percent contained. The cause remained under investigation.