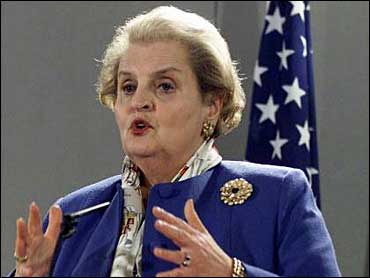 Former U.S. Secretary of State Madeleine Albright testified Tuesday that a Bosnian Serb politician who pleaded guilty to war crimes was torn between her Serb nationalism and her desire to support a peace process in war-shattered Bosnia.

The Czech-born former U.S. diplomat said Biljana Plavsic surprised her when the two met in 1997 and Plavsic indicated that she wanted to help implement the peace agreement negotiated in 1995 in Dayton, Ohio.

Albright, who was testifying at a pre-sentencing hearing for Plavsic, said scenes from the 1992-1995 Bosnian conflict of people being loaded onto buses and trains bound for concentration camps reminded her of images of the Holocaust during World War II.

Actions were "done in a deliberate way, as part of a plan to eradicate various types of people," Albright said. She said she was dismayed "to see it (Yugoslavia) had fallen back into barbarity."

She said Plavsic, who was deputy to Bosnian Serb leader Radovan Karadzic during the conflict, bore some responsibility for atrocities prior to the Dayton accords.

"Obviously, she was involved in horrendous things before that," Albright told the three-judge panel.

Albright had been called by both sides to testify at the hearing. After serving as Karadzic's deputy, Plavsic later became president of Bosnian Serb republic from 1996-98.

Plavsic was indicted for planning the purge of non-Serbs from areas of Bosnia along with Karadzic, who is now the tribunal's most wanted fugitive. She broke with Karadzic after the war.

In an arrangement with the prosecution, Plavsic pleaded guilty last October to one count of persecution of Muslims and Croats. In exchange, prosecutors dropped seven other war crimes charges, including two counts of genocide.

The charge carries a maximum penalty of life in prison. But at age 72, Plavsic has said almost any prison term could amount to life. She is the only woman indicted by the tribunal.

In an opening statement Monday, defense lawyer Eugene O'Sullivan urged the judges to consider Plavsic's voluntary surrender for trial, her guilty plea and her statement of remorse.

In that statement, Plavsic's lawyer said her "acceptance of this responsibility will, she hopes, enable her people to move past the carnage of the past decade, to reconcile with their neighbors, and, ultimately, to restore their dignity as a respected people."

The hearing is to continue through Wednesday, but the judges were not expected to sentence her until next year.

Albright said she found Plavsic's policies of Serb superiority "repugnant," but she changed her mind about the Bosnian leader after their first meeting in 1997.

"We talked at some length about what her intentions were. And it was at that point that it became evident to me that she understood all the things that had gone wrong," Albright said. Plavsic indicated she wanted to implement the peace agreement in a democratic way and "was doing it at some risk to herself."

Plavsic listened intently to Albright, her face revealing no feelings. She played absent-mindedly with a pen but appeared to be fully focused the entire time.

Albright said that during their post-Dayton talks, she found Plavsic "to be a very conflicted individual" as she struggled to protect the Serbs while carrying through the Dayton plan which sought to balance the interests of Muslims and Croats in Bosnia.

She argued that Plavsic's guilty plea could help victims find closure and move on with their lives.

On Monday, Nobel Peace laureate Elie Wiesel, who survived in a Nazi concentration camp, surged the judges to remember the hundreds of thousands of Bosnian victims, telling the tribunal its sentence will set a standard for centuries.

"If all the pain and suffering of all the victims were to be placed on one set of scales, how many years of prison would it take on the other to achieve justice?" he asked.

The Dayton accords ended one of four wars that wracked Yugoslavia under the rule of Slobodan Milosevic, first as Serbian president and then as leader of all of Yugoslavia. He was also a force in conflicts in Slovenia, Croatia and Kosovo.