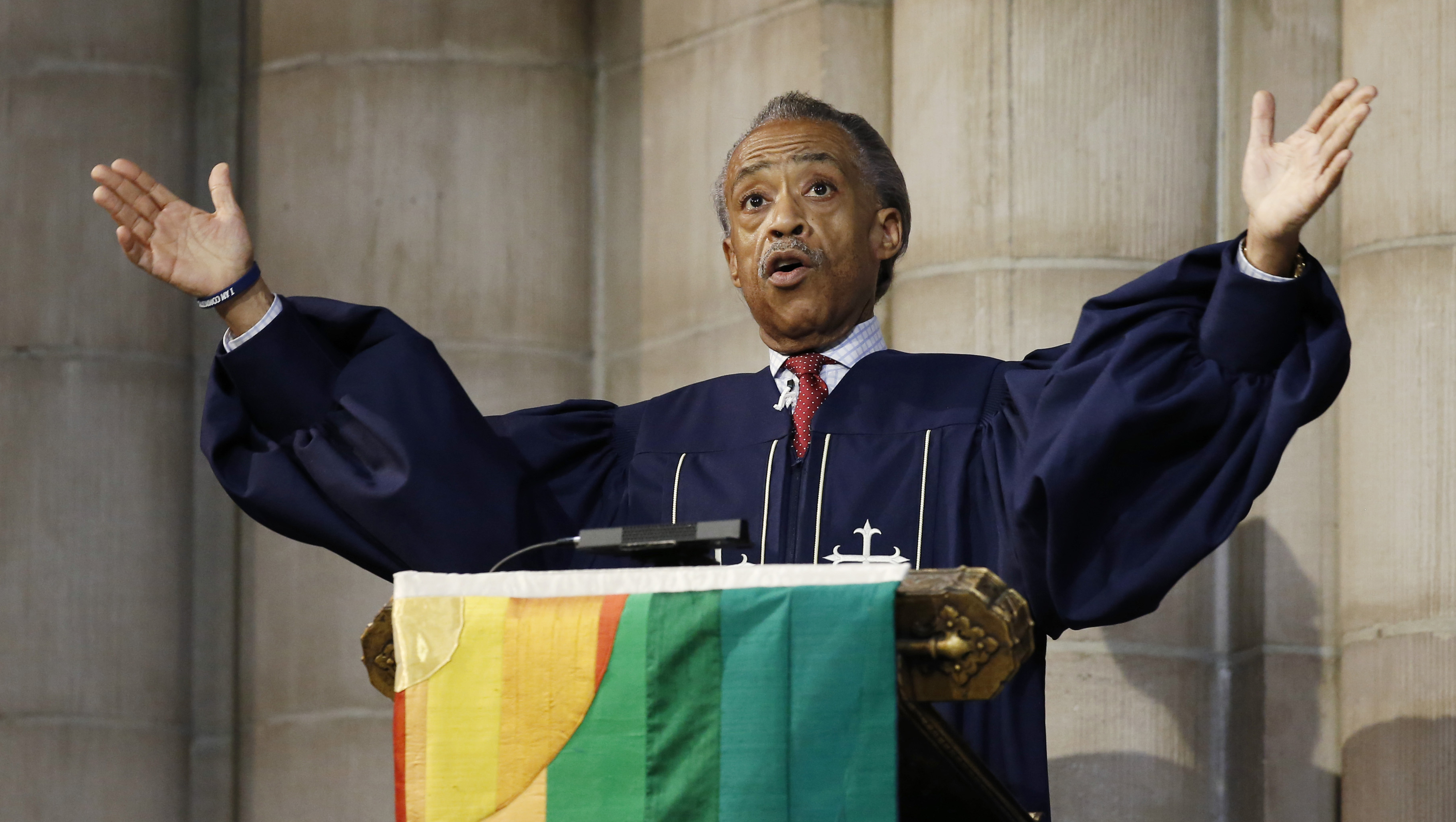 NEW YORK - In a Sunday appeal from the pulpit, the Rev. Al Sharpton demanded justice for a man he said was choked to death by New York City police but added that citizens who attack police officers also should be held accountable.

The activist minister and television host spoke at Manhattan's Riverside Church three days after the death of Eric Garner on a Staten Island street.

Garner was "choked by New York City policemen," the Harlem preacher told the congregation. "What bothers me is that the nation watches a man say 'I can't breathe' and the choking continues, and police surround him and none of them even say, 'Wait a minute, stop! He can't breathe!'

"When does your sense of humanity kick in?" he asked.

The officer linked to what the police commissioner has said was an apparent chokehold has been stripped of his gun and badge and placed on desk duty.

Chokeholds are banned under department policy. Garner's cause of death has yet to be determined.

In the first lawsuit, settled by the city in January, two black men accused Pantaleo and other officers of arresting them without cause and subjecting them to a "humiliating and unlawful strip search" on the street in which they were ordered to "pull their pants and underwear down, squat and cough." The men said they were held overnight on charges that were ultimately dismissed.

In a second lawsuit, a man accused Pantaleo and other officers of misrepresenting facts in a police report and other documents to substantiate charges that also were dismissed.

In addition to Pantaleo, an eight-year NYPD veteran, a second officer who has been with the department for four years was taken off the street but retained his gun and badge. The reassignments will remain in effect while prosecutors and internal affairs detectives probe Garner's death, police said.

However, Sharpton said it was equally wrong for a New Jersey man to fatally shoot an officer last week. His widow said he should have killed more officers but later apologized for the remark.

Video of Garner's struggle with police obtained by the New York Daily News shows the 6-foot-3, 350-pound man becoming irate and refusing to be handcuffed as officers tried to arrest him on suspicion of selling untaxed, loose cigarettes.

Garner, who has been arrested for illegally selling cigarettes numerous times in recent years, told the officers who confronted him Thursday that he had not done anything wrong, according to the video of the arrest.

Another video appears to show Garner moments after he lost consciousness. CBS News reported that he can be seen lying on the ground, still in handcuffs. His eyes are open but he appears unresponsive. The officers talk to him, check his pulse and empty his pockets. Garner does not react, even after a paramedic arrives.

The 43-year-old father of six was declared dead shortly after at a hospital. Authorities believe he suffered a heart attack.

More tests are needed to determine the exact cause and manner of his death, a spokeswoman for the medical examiner's office said.