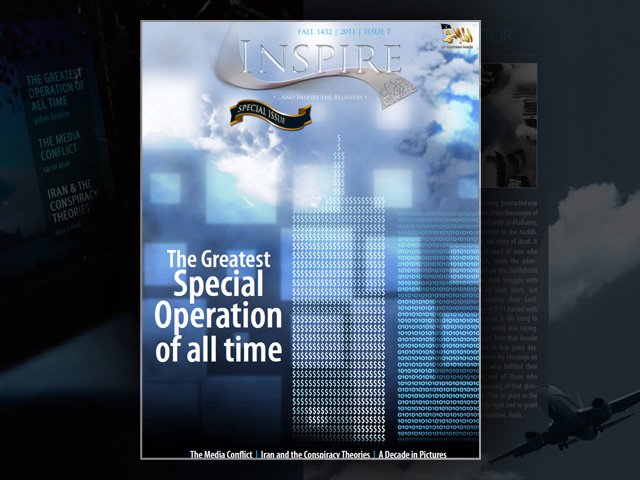 Al Qaeda in Yemen has released an edition of its English-language magazine, "Inspire," celebrating the 10th anniversary of the 9/11 attacks.

In the magazine, the group decries Iranian president Mahmoud Ahmadinejad's recent remarks at the United Nations suggesting that the U.S. and Israeli spy agency Mossad may have orchestrated the attacks, saying that Ahmadinejad sought to discredit al Qaeda because "it succeeded where the Iranians had failed."

"Iran and the Shi'a in general do not want to give al Qaeda credit for the greatest and biggest operation ever committed against America because this would expose their lip-service jihad against the Great Satan," author Abu-Suhail wrote.

One article included a quote from slain al Qaeda chief Osama bin Laden in which he advised fellow mujahedeen not to be too discouraged by America's superpower status, which he described as false propaganda.

"Do not let America's front and its troops seem hard and become great in your eyes, as we have struck them repeatedly and they were defeated frequently and they are the most cowardly at the time of encounter," bin Laden had said.

In another story, Samir Khan, a 25-year-old American al Qaeda propagandist from North Carolina, and publisher of "Inspire," stressed the importance of the media and use of "online jihad." He summed up his idea in a piece of advice given to him by the leader of al Qaeda in the Arabian Peninsula, Nasser al-Weheishy: "The media work is half of the jihad."

Another author, Yahya Ibrahim wrote an analysis of the effects -- 10 years later -- of what he described as the "greatest operation in the history of mankind." Ibrahim deduced that 9/11 has completely drained the U.S. economically and militarily, and, above all, helped al Qaeda spread its jihadist ideology across the world.

"Ten years from 9/11 and the mujahidin have spread out from Afghanistan to Pakistan, Yemen, Somalia, North Africa and God willing the list will grow and the proliferation of jihad will continue," Ibrahim wrote.

U.S.-born radical imam Anwar Awlaki was not included in this issue of the magazine for the first time since its launch in July 2010. But the magazine's back cover announced the imminent release of an article penned by the notorious preacher.

A "Coming Soon" graphic was placed over a picture of Grand Central Station along with the title, "Targeting the Populations of Countries that Are at War With Muslims."