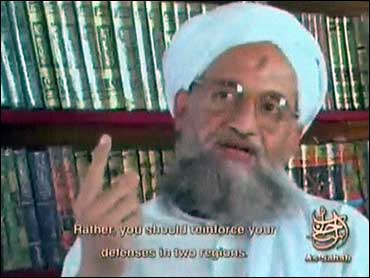 CAIRO - Osama bin Laden's deputy sought to co-opt the uprisings in Egypt and Tunisia in a new message, urging the countries' peoples to create Islamic states and warning that the United States is trying to manipulate the events to ensure American and Israeli interests are preserved.

The message by Ayman al-Zawahri appeared to have been recorded between the Jan. 14 fall of Tunisian president Zine El Abidine Ben Ali and before the Feb. 11 ouster of Egypt's Hosni Mubarak. Al-Zawahri urged Egyptians and Tunisians to keep up their protests to push out interim governments that continue in place in both nations.

The wave of popular protests in both countries was led by mainly secular youths calling for greater democracy, and their success appears to have caught Osama bin Laden's terror network off guard.

Al-Zawahri — whose al Qaeda views democracy as anathema to Islam — tried to depict the uprisings as aiming to set up Islamic governments.

"Greetings to every free, honorable individual who was exposed to the bullets of the security herds to keep Islam as the master in his own country, preserve the headscarf of the Muslim sisters, stop normalization with Israel ... and protect his society from immorality, corruption and spoilage," al-Zawahri said in the 15-minute audiotape posted on an Islamic militant website late Sunday.

The audiotape was the third in a three-part message al-Zawahri has released about the uprisings in the two countries. Al Qaeda has long called for the ouster of Mubarak, and Zawahri, an Egyptian, was part of an Islamic militant insurgency that Mubarak's regime crushed in the 1990s.

Al-Zawahri called on the Tunisians, Egyptians and all Muslims to "beware lest your sacrifices are being stolen, your suffering is being manipulated and that faces will change, but the injustice remains."

He said Mubarak and Ben Ali's regimes were "an inseparable part of the global system that is fighting Islam and Muslims, and America is at its head" — and that even when they go, Washington was working to ensure its allies remain in place.

In Tunisia, "when it (the United States) realized that its man was burned and his harm became greater than his benefit, it drove him out to the history's dustbin ... and congratulated the new government which is an extension of the gangs of Ben Ali," al-Zawahri said.

He said Washington was trying to avoid the establishment of an Islamic rule that would consider Israel as an enemy and reject aiding America in its war against Muslims under the name of the war on terrorism.

Al-Zawahri urged Tunisians to continue their "sacrifices and efforts until Tunisia returns as a fortress of Islam and jihad ... and to work to liberate Muslims lands off the armies of the contemporary Crusader campaign in Afghanistan, Pakistan, Iraq, the Arab peninsula, Somalia and the Islamic Maghreb."

Speaking before Mubarak's fall, al-Zawahri said the U.S. would do the same in Egypt. Washington is waiting to see if Mubarak fails and the "volcano turns uncontrollable, then Mubarak's mansion is ready in the ... dustbin" of exile, he said.

Al-Zawahri predicted that if Mubarak falls, the United States would try to install Nobel Peace laureate Mohamed ElBaradei, who is one of the leading secular democracy advocates in Egypt. He said ElBaradei will "give the poor some freedom ... but Egypt will stay as a base for the Crusader's' campaign and a basic partner to America's war on Islam in the name of the war against terrorism."

So far, at least that prediction by al-Zawahri appears to be wrong. There's been no sign of ElBaradei rising to a position of leadership in Egypt since Mubarak's fall. Egypt's military now runs the country, leading a transition in which the constitution is to be amended to allow free elections for parliament and president later this year.

Many protesters, however, fear the transition will not bring enough change to break the remnants of Mubarak's regime. The last government appointed by Mubarak remains in place as a caretaker, though it has been reshuffled to bring in opposition figures.