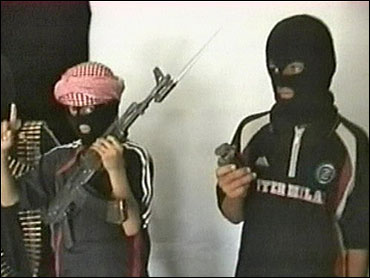 Al Qaeda has successfully established a network for recruiting boys as young as 12 from across central Asia as it seeks new volunteers to enlarge its team of prospective suicide bombers and militants fighters, senior security officials from the Middle East have revealed to CBS News.

News of al Qaeda venturing into the former Soviet central Asian republics with a population that has a largely Muslim heritage marks a significant addition to reports earlier this year that the hardline group had recruited young boys in the Pak-Afghan border region.

Last May, a senior Pakistani security official showed a rare video clip to CBS News documenting a boy, barely 12 years old, using a machete to severe the head of a middle-aged man whom militants probably suspected as being a spy for the U.S.

In an execution which typified the Taliban brand of quick justice, that boy severed the head of his victim who was completely tied up and thrown on the ground as a crowd of hundreds of spectators cheered.

The mountains visible in the background of the video suggest that it was carried out in the rugged terrain somewhere in the border area between Pakistan and Afghanistan.

"The effort to recruit young boys for the cause has been extended to central Asia. We have reports that this effort may now be up to two years old," said one senior Middle Eastern security official who spoke to CBS News on condition of anonymity.

He said al Qaeda appears to have had more success in central Asian countries such as Tajikistan and Uzbekistan - the two states at the center of Islamic militancy - compared to other central Asian republics.

Though impossible to document the scale on which al Qaeda has successfully recruited young boys, the security official said, "You are looking at maybe a few hundred such cases."

While confirming the report of al Qaeda recruiting boys in central Asia, another Middle East security official said the militant group was eager to build its ranks in the former Soviet republics, which are seen as an emerging important frontier.

"There is too much pressure on al Qaeda in the Pak-Afghan region, so they are looking at others areas to spread their wings," said the second official who also spoke to CBS News on condition of anonymity.

"They (al Qaeda) probably believe that heading out to central Asia would be good for their cause. One big advantage is that, unlike the Pak-Afghan region, there is less focus by the U.S. in central Asia" - a reference to the large presence of U.S. military forces on the ground in Afghanistan.

News of this recruitment pattern comes as Pakistani authorities on Friday braced for the first anniversary of last year's military attack on the "Lal" (red) mosque in the center of Islamabad, once a nerve centre of Islamic militants.

The late Abdul Rasheed Ghazi, a firebrand Islamic preacher from the mosque, had vowed to establish an Islamic system of justice, and last summer ordered his followers to enforce strict Islamic interpretations. The edict included attacking shops selling music CDs.

The stand-off surrounding the mosque revealed that a number of armed militants who fought the military last year had joined hardline groups when they were still teenagers. The fighting culminated with the killing of Ghazi and his co-militants.

Islamic hardliners have now promised to commemorate the anniversary on Sunday, when many who sympathized with Ghazi's cause are expected to visit the mosque and pay their respects.

Farhan Bokhari has been covering Southeast Asia for several large European news organizations for 16 years. Based in Islamabad, he focuses his coverage on politics and security issues surrounding the war against terrorism.
By Farhan Bokhari