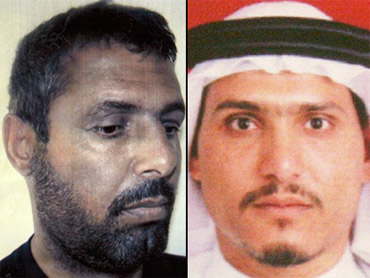 An al Qaeda front group in Iraq declared in a statement posted on the Internet Sunday that its two top figures have been killed.

The statement by the Islamic State of Iraq provided the first confirmation from the terror network of the April 19 claim by the Iraqi and U.S. governments that the two men were killed in a joint operation while hiding at a safe house near the city of Tikrit, north of Baghdad.

U.S. Vice President Joe Biden has described the death Abu Omar al-Baghdadi and Abu Ayyub al-Masri as a "potentially devastating blow" to al Qaeda in Iraq. Their deaths also have provided Iraqi Prime Minister Nouri al-Maliki with a boost in his efforts to keep his job after his coalition finished second in parliamentary elections held March 7.

Sunday's statement said the death of al-Baghdadi and al-Masri would not affect the group's operations in Iraq after new members have joined the group recently. It also poured lavish praise on the two men.

"After a long journey filled with sacrifices and fighting falsehood and its representatives, two knights have dismounted to join the group of martyrs," the statement said. "We announce that the Muslim nation has lost two of the leaders of jihad, and two of its men, who are only known as heroes on the path of jihad."

The statement was posted two days after bombings mostly targeting Shiite places of worship killed 72 people in Iraq's bloodiest day so far this year. The bombings were seen as an apparent backlash by the Sunni-led insurgency after the slaying of the two al Qaeda leaders.

Nobody claimed responsibility for Friday's attacks, but Iraqi officials were quick to blame al Qaeda, which often targets Shiite mosques and religious processions in a bid to stoke new sectarian bloodshed.

Al-Maliki said the insurgents were fighting back after the deaths of their two leaders.
By Associated Press Writer Sarah El Deeb