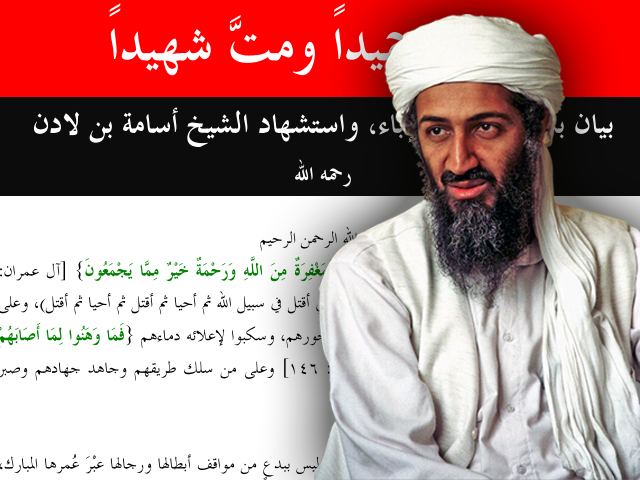 CAIRO - Al Qaeda on Friday confirmed the killing of Osama bin Laden and warned of retaliation, saying Americans' "happiness will turn to sadness."

The confirmation came in an Internet statement posted on militant websites, signed by "the general leadership" of al Qaeda. The announcement opens the way for the group to name a successor to bin Laden. His deputy Ayman al-Zawahri is now the most prominent figure in the group and is a very likely contender to take his place.

The statement, dated May 3, was the first by the terror network since bin Laden was killed Monday by U.S. commandos in a raid on his hideout in Abbottabad, Pakistan. The statement's authenticity could not be independently confirmed, but it was posted on websites where the group traditionally puts out its messages.

"The blood of the holy warrior sheik, Osama bin Laden, God bless him, is too precious to us and to all Muslims to go in vain," the statement said. "We will remain, God willing, a curse chasing the Americans and their agents, following them outside and inside their countries."

"Soon, God willing, their happiness will turn to sadness," it said, "their blood will be mingled with their tears."

There was no indication how the group will retaliate. Rather than making vehement cries of vengeance, the statement — entitled "You lived as a good man, you died as a martyr" — struck a tone of calmness and continuation. Though it included praise of bin Laden, much of the 11-paragraph statement was dedicated to underlining that al Qaeda would live on, depicting him as just another in a line of "martyrs" from the group.

"It is impossible, impossible. Sheik Osama didn't build an organization to die when he dies," the statement read. "The university of faith, Quran and jihad from which bin Laden graduated will not close its doors," it added.

"The soldiers of Islam will continue in groups and united, plotting and planning without getting bored, tired, with determination, without giving up until striking a blow," the statement.

It said bin Laden was killed "along an established path followed by the best of those who came before him and those who will come after him."

In an interview with Steve Kroft for Sunday's "60 Minutes" President Obama said he wouldn't release post-mortem images of bin Laden taken to prove his death, largely out of concern that they would fuel anti-U.S. sentiment in the Middle East.

"It is important to make sure that very graphic photos of somebody who was shot in the head are not floating around as an incitement to additional violence or as a propaganda tool," the president said."We don't trot out this stuff as trophies.

The president said he had discussed the issue with his intelligence team, including Defense Secretary Robert Gates and Secretary of State Hillary Clinton, and that they agree with the decision.

In explaining his choice not to release the photo, Mr. Obama said that "we don't need to spike the football." He said that "given the graphic nature of these photos it would create a national security risk."

In the statement posted Friday, al Qaeda also called on Pakistanis to rise up in revolt against its leaders to "cleanse the shame." It also said that an audio message bin Laden recorded a week before his death would be issued soon.

The writers of the statement appeared unaware of the announcement by American officials that bin Laden's body had been buried at sea. The statement warned against mishandling or mistreating bin Laden's body and demanded that be handed over to his family, saying "any harm (to the body) will open more doors of evil, and there will be no one to blame but yourselves."